The Old Seven Mile Bridge closed for repairs in 2016 and is not scheduled to reopen until December 2021.

The $77 million project to restore the bridge includes repairs to concrete and steel, a new pedestrian railing, signs and pavement markings.

Pigeon Key, the historic island in the middle of the old bridge, is still open for tours and it’s reached by a scenic boat ride. (Details below.) 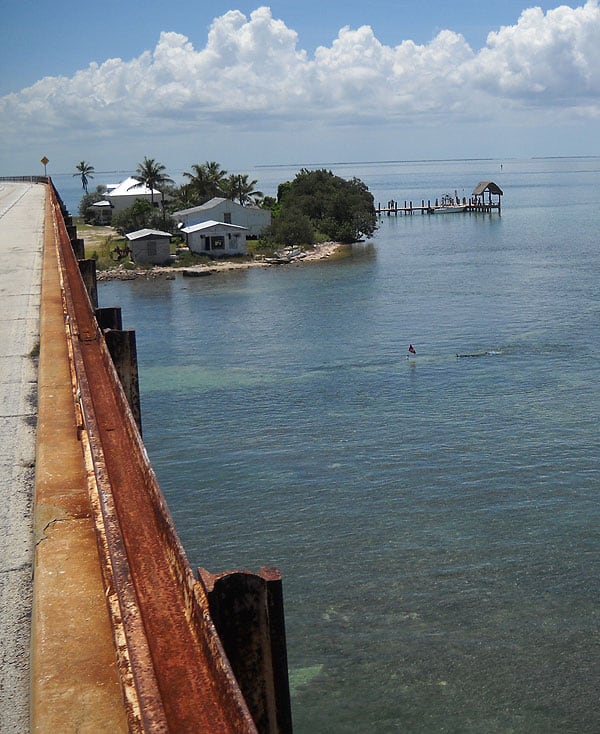 Before it was closed for restoration, rusting railroad tracks served as guard rails on the Old Seven Mile bridge. Pigeon Key and its dock is in the distance. (Photo: Bonnie Gross)

His Overseas Railroad, the first land route ever from Miami to Key West, never was a financial success and then it became a downright disaster. A devastating 1935 hurricane brought 200 mph winds and a 17-foot storm surge, washing away miles of railroad. Flagler’s bankrupt Florida East Coast railway sold the whole right-of-way to the state for one-seventh what it cost Flagler to build the railroad. 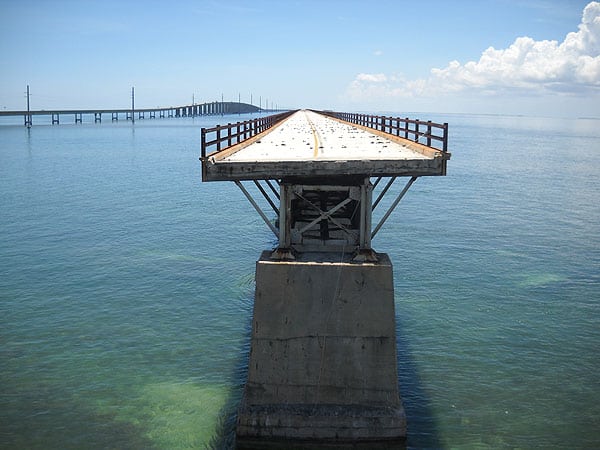 The Old Seven Mile Bridge was easily converted by the state of Florida to an automotive bridge — that’s the surface being restored today. Until 1982, when the adjoining new bridge opened, it was the only road cars could take to Key West. (I vividly remember it as a white-knuckle ride, and when you experience how narrow it is first-hand, you will know what I mean.)

Folks in the Keys treasure the Old Seven Mile Bridge and, before it closed for repairs, used it daily to walk, fish and watch the famous Florida Keys sunset. When it re-opens, I am sure it will be more popular than ever; I thought riding my bike on that section of the old bridge was about as great a ride as you can find.

The repairs to the bridge are to the 2.2 mile portion between Marathon and Pigeon Key. The other 5.8 mile section of the Old Seven Mile Bridge south of Pigeon Key cannot be accessed– a section was removed south of the island to prevent that. Today the remaining expanse rusts in the sun and solitude, with an occasional tree finding enough dirt in a crack to sprout from it. 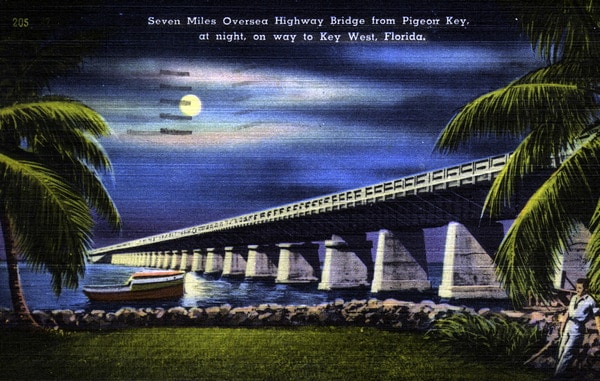 When you visit the Old Seven Mile Bridge, it may look familiar. It has appeared in several films, most famously the 1994 True Lies with Arnold Schwarzenegger, when the old bridge is shown being destroyed by missile strikes. (The explosion was done on an 80-foot model.) 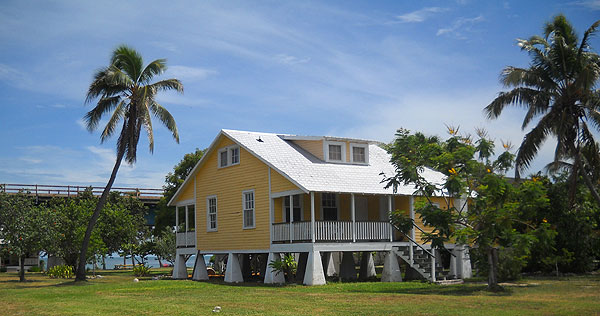 Few history lessons are as beautiful as this one: A visit to Pigeon Key, a picturesque little island surrounded by dazzling blue water in the middle of the Old Seven Mile Bridge.

There are lots of places I love in the Florida Keys, but Pigeon Key is at the top of the list. 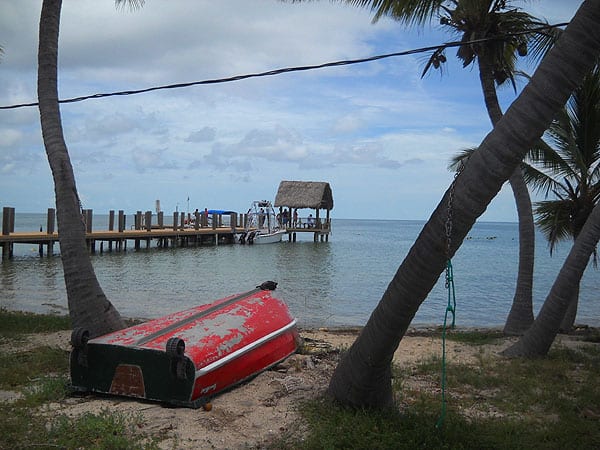 The dock on Pigeon Key is a good place to snorkel. (Photo: Bonnie Gross)

Here’s what I love: spectacular views, its isolation from the outside world, an amazing human story, charming historic buildings, snorkeling off the dock and the fact that the island gets 95% of its energy from solar power.

Pigeon Key visitors pay $12 (kids 5-13 are $8.50) and are whisked by speed boat from Marathon to the island — a delightful two-mile ride under both the new Seven Mile Bridge and the old one.

A tour guide walks you through many of its 11 historic buildings. Pigeon Key housed the workers who built the Seven Mile Bridge from 1908 to 1912 for railroad magnate Henry Flagler, a partner of John D. Rockefeller.

The Seven Mile Bridge and Pigeon Key’s fascinating history are told through displays and artifacts in its museum.

There’s more than history on Pigeon Key. Visitors can bring their lunch and relax under the shade created by the solar array built on the island’s east side. Picnic tables are available and you are encouraged to stay after the tour and snorkel in the clear waters off Pigeon Key’s dock.

The $77 million project to save the Old Seven Mile Bridge

Saving Old Seven had been a major cause in the Keys and in 2014, three levels of government came together to fund a major restoration project. Under the plan, the county, the City of Marathon and the Florida Department of Transportation all contribute. FDOT pays $57 million over a 30-year period; Monroe County pays  $14 million and the City of Marathon pays $5 million. When the bridge is refurbished, it will be able to hold 17-ton vehicles, such as fire trucks.

The first phase of the project began in 2017.  That $2 million project created a handicapped-accessible walkway from the old bridge under the new bridge to the ocean side. It will include adding picnic pavilions and scenic overlooks. In 2019, a $1.9 million portion of the project was underway — building an exact replica of the wooden “off ramp” that leads to Pigeon Key. Details are here. Along the entire 2.2 mile stretch, crews are replacing some of the rusted steel beams and strengthening the concrete piers that support the bridge.

Other nearby things to do in the Upper and Middle Keys

Many readers have written to ask: Can you bicycle across the new Seven Mile Bridge?

You could only do this on the new bridge — I wouldn’t do it but, then, I’m a recreational bicyclist who is looking for stress-free, safe trails. It is not recommended for that kind of  ride!

Many bicyclists do it. There’s about a five-foot lane for bikes and the bridge is mostly flat, with about one-mile at the center elevated, according to a bicyclist who has written about it. Here’s a section of her account on pedaling the length of the Keys.

Here’s more about the Florida Keys Overseas Heritage Trail. If you are bicycling in the Keys and want to skip crossing the Seven Mile Bridge, Marathon taxis now have bike racks and can shuttle you and your bike across the bridge.

This is a bike trail with a story to tell.The Old Seven Mile Bridge is not only spectacularly scenic, it also brings you as close as you can to experiencing HenryFlagler’s historic “railroad that went to sea.” The bridge, an engineering marvel of its day, is listed on the NationalRegister of Historic Places.

Today, it makes a memorable bike ride or walk when you’re visiting the Florida Keys. Peering over the rusting guardrails —
the actual rail tracks that carried trains during its brief run from 1912 to 1935 — you gaze into the translucent waters and

may spot sharks or other marine life. Magnificent frigatebirds and pelicans soar overhead.

It is 2.2 miles to Pigeon Key (a great visit and subject of another post here.) If you want more biking after your roundtrip

on the bridge, the Florida Keys Overseas Heritage Trail extends north for 11 miles to MM 58.

what opened the state to the world. For better or worse, Florida is what it is because of Henry Flagler.

His Overseas Highway, the first land route ever from Miamit to Key west, was a more complicated story. It never was a a

tidal wave, washing away miles of railroad. Flagler’s bankrupt  F.E.C. Railway sold the whole right-of-way to the state for

one-seventh what it cost Flagler to build the railroad.

walk today. Until 1982, when the sleek new bridge opened, it was the only road cars could take to Key West. (I vividly

remember it as a white-knuckle ride, and when you experience how narrow it is first-hand, you will know what I mean.)

Folks in the Keys treasure the bridge and use it daily. In season, it fills up each night with people lined up to watch the

If you’re interested in the old bridge, you better come see it while you can.

It is deteriorating and Monroe County and the State of Florida can’t find the money to maintain it.

Maintenance was in the budget for 2015 and has been pushed back to 2025, according to Kelly McKinnon, the executive director

of the Pigeon Key Foundation.

To help preserve the bridge, no vehicles are now allowed on it except the Pigeon Key golf cart. Pigeon Key used to run a tram

out to the island, but now visitors come by boat. Recently, fishing, once a most popular pastime, was banned on the bridge to

The main issue with the bridge, McKinnon says, is that the unsupported sections that were added in 1935 to widen the

structure for vehicle traffic are starting to sag.

The other 5.8 mile section of the Old Seven Mile Bridge south of Pigeon Key isn’t reachable — a section was removed south of

the island to prevent access– and today that section rusts in solitude, with an occasional tree finding enough dirt in a

crack to sprout from it.

With no maintenanca, will the odl bridge just blow down in the next hurricane?

McKinnon laughs at the thought.  “The new bridge will go down before the old one does. It’s been there for 100 years; it was

made to last. The new one was just builty by the lowest bidder.”

If you plan to bike or walk the Old Seven Mile Bridge:

— There is parking just north of the bridge gulfside at Mile Marker 47. To visit Pigeon Key by boat, go to the visitor

center on the oceanside. 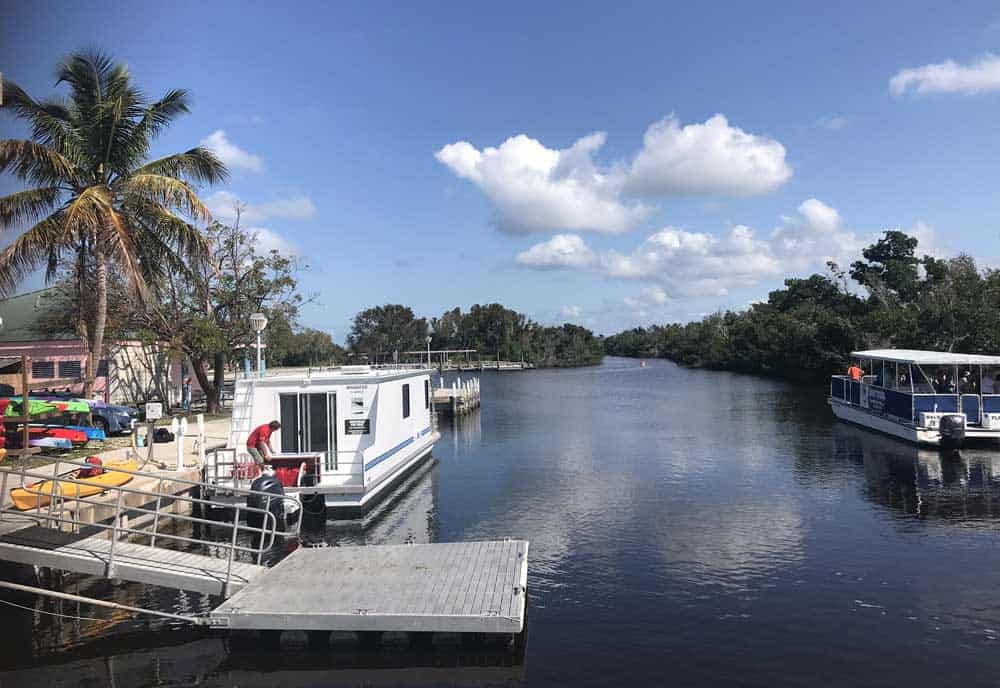 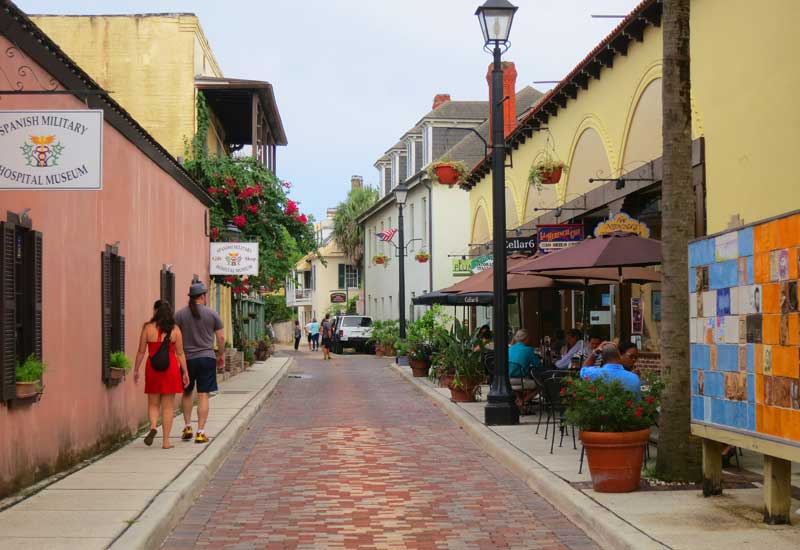 Next
Five cool things we discovered in St. Augustine

There was an explosion at the turnstile (for boat passage) on the original overseas highway. Is there any info available about it. I think this happened in 1981 or 82.

In 1981, there was an explosion on a draw span that killed the tender. Here's more: https://conchscooter.blogspot.com/2011/03/seven-mile-bridge-memorial.html

[…] Only have half a day to spare or don’t feel like walking quite so many miles in one day? I recommend the old Seven Mile Bridge and Pigeon Key. It’s a little over two miles to get to Pigeon Key from the start of the old bridge in Marathon, so the round-trip would roughly be five miles. It’s a good walk but nowhere near as long and strenuous as my other suggestions. Plus, there is the option of taking a guided tour at Pigeon Key and brush up on some important local history, as well as admiring historic houses and beautiful views. Information on tours, times and prices can be found in this Florida Rambler article. […]

[…] to Elizabeth Taylor and Ernest Hemingway. The Florida Keys are also connected in part by the famous Seven-Mile Bridge, a unique destination […]

[…] and it’s what you think of having seen the movies, which often feature scenes of the famous Seven Mile Bridge. It’s just south of Marathon, where hopefully you’ll have transited quickly enough to not be […]

[…] Largo, enjoyed gorgeous view and  stone crabs at Islamorada Fish Company, took photos on the Seven Mile Bridge (as if we didn’t elsewhere :-P),  and walked around in Key […]