Everglades National Park is the largest U.S. wilderness east of the Mississippi, and yet often when we visit, we’re surrounded by other people.

We wanted a wilderness experience to feel the vastness of the Everglades, and so we canoed 11 miles along the coast from Flamingo to Cape Sable – all the way to the Gulf of Mexico — and camped at a pristine wild beach.

It was spectacular – so many birds; such beautiful scenery; a memorable sunset, sunrise and starry skies; so quiet and remote.

It was also a challenge. Paddling a canoe loaded with gallons of water, tent, food and assorted gear for 11 miles felt grueling at times, especially on our return paddle.

We read it would take four to six hours to paddle there. Outbound, without rushing, we did it in six. On the return, however, with a bit of wind to our face in the morning, it took us almost eight hours. (Note: Others do this paddle in far less time. More on that later.)

I’ve heard from friends about canoeing and camping at Cape Sable for a long time.

This trip is often part of a longer wilderness experience. A popular expedition is paddling an inland route through Whitewater Bay and then returning along the Gulf Coast around Cape Sable and on to Flamingo. This is usually done in five or six days with several nights camping at chickee hut platforms in Whitewater Bay.

This kind of expedition is beyond me, my humble camping gear and my limited wilderness experience.

Paddling from Flamingo to Cape Sable, on the other hand, is a much better fit – an easier adventure, requiring one night of camping and, best of all, following the coast the whole way. This means you don’t have to worry about getting lost and if weather changes and the wind comes up, you can harbor on the shore easily. This trip doesn’t require GPS or nautical maps. If you have ATT, you’ll even have cell phone service out there, thanks to the tower in Flamingo.

And the reward for this trip is big. Yes, there are hours of paddling, but it is full of wildlife. After we were a few miles beyond Flamingo, we saw more sharks than people.

Getting a Cape Sable camping permit and back-country alternatives

All back country camping in Everglades National Park requires a permit. They are easy to get now that you do it through recreation.gov.  You can book a permit up to 90 days in advance. You must check in at the appropriate ranger station (Flamingo if you’re going to Cape Sable) the morning before you leave.

For a weeknight in February we booked our permit just two nights in advance – and we were the only campers at East Cape Sable that night! The park service limits East Cape Sable to 13 groups with no more than 52 people total. That may sound like a lot, but since the East Cape Sable area offers two miles of beach camping, even when full, campers are spread out.

Generally, you can get East Cape Sable permits on the morning of your outing, according to park rangers.

A shorter wilderness beach camping experience out of Flamingo is available by camping at two sites on the way to Cape Sable – Clubhouse Beach and East Clubhouse Beach.

These are smaller sites; each allows only two groups of campers. East Clubhouse Beach is 4.5 miles from Flamingo; Clubhouse Beach is 7.5 miles. Rangers recommend these trips for visitors on their first back-country paddle trip. You can reach the first site in about two hours.

We paddled past these sites and stopped to stretch our legs here. These would make a good stop-over on a multi-day trip, but they are not as scenic as Cape Sable. The beaches are much smaller in length and depth.

Clubhouse Beach is the end-point of the 7.5 mile Coastal Prairie hiking trail, so backpackers also reserve this site. (That trail is not currently being maintained and the final section is generally a muddy slog. Nothing I have read has made me want to hike it.)

The canoe trip to Cape Sable

We set off blessed with a sunny day in the high 60s with little wind – perfect paddling weather.

During our hours of paddling, we were entertained by extensive bird life. We stayed close enough to the shore most of the way (extending our paddling time, I’m sure) to see many osprey guarding their freshly caught fish, many egrets and herons complaining about our presence, groups of ibises, kingfishers flitting from tree to tree, red-bellied woodpeckers and, most spectacularly, roseate spoonbills flying overhead near Flamingo.

The shoreline is mostly mangroves, broken up by occasional beaches. Most of the way, the shoreline is lined with the bleached skeletons of mangroves that were victims of the 2017 Hurricane Irma. Their white, gnarly branches are stark against the green of the living mangroves and the blue sky.

On our way to Cape Sable, we paddled on a falling tide and we were almost always in water where our paddles touched the marl bottom on our downstrokes.

Occasionally, we passed canals into the interior. These were dug a century ago by Henry Flagler’s land company. Paddling a short way up these waterways was like plunging into a jungle. These are the best places to see crocodiles, which are common in the area, according to a ranger at Flamingo Visitor Center. (We didn’t see any crocs.)

There are plenty of sandy places along the way to stop and picnic or stretch and look around. At Clubhouse Beach, the adjoining prairie is the most vivid lime green color imaginable.

After paddling for hours and hours, we canoed toward a sandy point we could see that stretched into the water. We assumed this was Cape Sable. The space here is so vast, when you are paddling it seems to take a very long time to reach a point in the distance.

When we reached this sandy point, it was low tide and dozens of royal terns and a few pelicans were hanging out on a sand spit next to a canal. This site seemed like a magical place, but we had read online that you should not make the mistake of camping at the first sites, but paddle around the “corner” to the western-facing section of Cape Sable, where you have two miles of sandy beach.

We pushed on to give that a try, but as we rounded the bend, conditions changed -– it was windier with choppier water. We decided to go back and set up camp in that first calm and magical spot.

We LOVED our campsite. It was a sandy mound built up perhaps when the adjacent canal was dredged a hundred years ago. Across that canal was the sand spit so popular with the birds. We were far enough that they stuck around; close enough to see and be entertained by them.

From our campsite we could view a beautiful sunset and, in the morning, we unzipped our tent door to watch from our sleeping bags as the sun poked up above the water.

On these beach camping sites, you are allowed to build a campfire and to gather dead wood. We had a wonderful campfire, which started with the glow of the sunset and ended with skies dark enough to reveal a dazzling display of stars. We were not much bothered by insects — a few no-see-ums at sunset.

This is beach camping, with the ground made of course sand and thousands of seashells. But it’s not a beach where I’d want to swim. The ground below the high-tide line is a thick marly mud, the water is murky and stays shallow for a long distance out.

And then there are the sharks. We counted six about 4-foot-long sharks in the shallows around East Cape Sable while paddling at low tide. A ranger told us the common sharks are nurse sharks (normally docile) but there are also bull sharks (not always so nice.)

The ranger said they do not recommend swimming here. “Because of the sharks?” I asked. “Yes. And the crocodiles,” he answered.

Count me as convinced.

What we learned paddling back from Cape Sable

The next morning was glorious. We hated to leave. But when we got our back-country permit, the ranger had told us we would be paddling into the wind a bit on our return, so we pushed off by 9:15 a.m.

It wasn’t a gale, but somehow, our progress was incredibly slow. We stuck close to the shore to avoid the wind, knowing a shorter route was straight across the bays. As we saw the scenery inch by, we knew it was going to take us longer to return. And it did.

By mid-day, the wind died down and the water was smooth and glassy. Our pace picked up. Really, you couldn’t ask for more perfect conditions that afternoon. It was beautiful.

Still, with our slow morning, we didn’t pull into the Flamingo marina until about 4:45 p.m. And we were exhausted.

The day after we returned, I read on the Everglades National Park’s Facebook page about a group of buff guys — firefighters, former military, police officers, pilots, all probably 40 years younger than me, I should note — who rescued four people whose small plane had crashed right off East Cape Sable. They had paddled the 11 miles to East Cape Sable that day in under three hours.

So, yes, maybe you are more fit than me and can paddle 11 miles in adverse conditions a lot faster, but don’t minimize that this is a significant distance. Take a really good look at the forecast. Bring extra water, just in case.

Above all, appreciate the wildness and the weather. After all, that’s why we’re out there, to be part of something more powerful than our everyday urban lives. We’re here to experience nature; respect it. 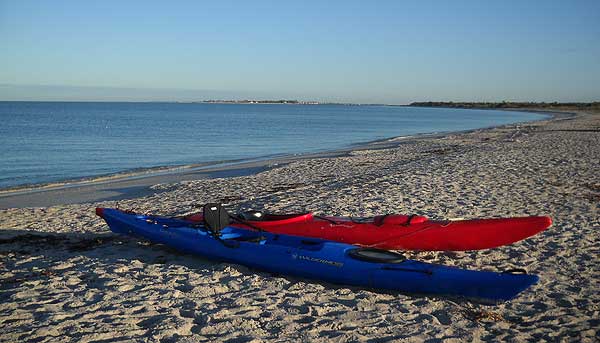 Previous
At Cayo Costa State Park, you live your dreams of a private island Excellent story and pictures. I really want to go now!

Wow what a great trip thanks for sharing