Historic hotels in Florida: Celebrate a special occasion at a grand hotel

Sleep in a room once occupied by Zelda and Scott Fitzgerald; lift your elbow at the bar that once fortified Clark Gable, and admire the very same waterfront viewed by US presidents in a hotel from Florida’s gilded past.

Huge and opulent, these historic hotels in Florida built between 1880s and the 1920s are from the Gilded Age through the Jazz Age. They are all beautifully renovated and offer elegant, historic holidays.

Historic hotels in Florida on the Gulf Coast 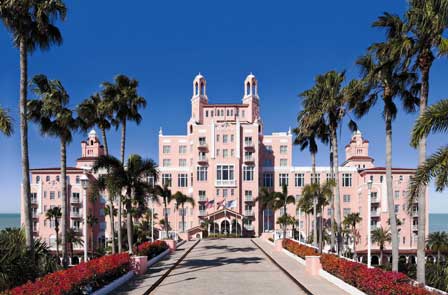 The Don CeSar Hotel in St. Pete Beach has a grand entrance fitting one of the most historic hotels in Florida.

The Don CeSar, which appears like a pink mirage as you cross onto St. Pete Beach, was railroad magnate Henry Plant’s dream. Opening in 1928 and always a startling shade of pink, it’s been known as the Pink Castle, the pink Lady or the Pink Palace. All 277 rooms were completely renovated in 1973. (This is the Florida hotel, where in 1932, Scott and Zelda partied.)
Tip for visiting: You’ll get free parking (otherwise very expensive) if you have a meal or get an ice cream. (A drink at the bar won’t get you free parking any longer.)

In nearby St. Petersburg is The Vinoy Renaissance Resort and Golf Club which opened in 1925 as the Vinoy Hotel. Famous for its pink facade and bell-tower, it was the most expensive hotel in the city at the time ($20 per night) and proudly featured a two-story ballroom and exquisite lobby. Owned by the Marriott chain today, the hotel offers a spa and golf course.
Tip for visiting: You don’t have to stay at the Vinoy to enjoy it. Vinoy Renaissance offers tours of the hotel and gardens. Reservations required. 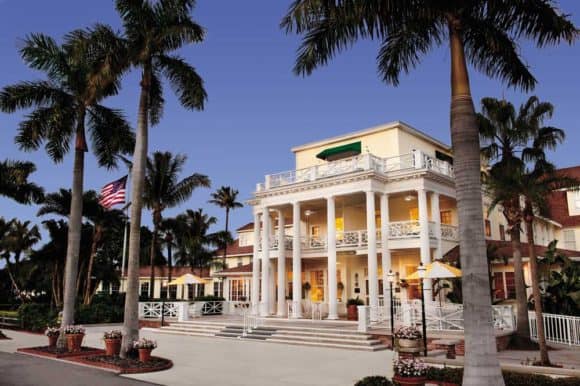 The Gasparilla Inn and Club lies in the small town of Boca Grande on Gasparilla island, and it was among the most exclusive resorts in Florida when it opened in 1913. Particularly favored by the Boston elite, references were once required prior to booking a room. Now, a hundred years later, it maintains an under-stated elegance with its palm-filled dining and sitting rooms. Nearby cottages are also available to rent. Boca Grande itself is a trip back in time with no traffic lights or gas stations and many historic homes.

Historic hotels in Florida on the Atlantic Coast 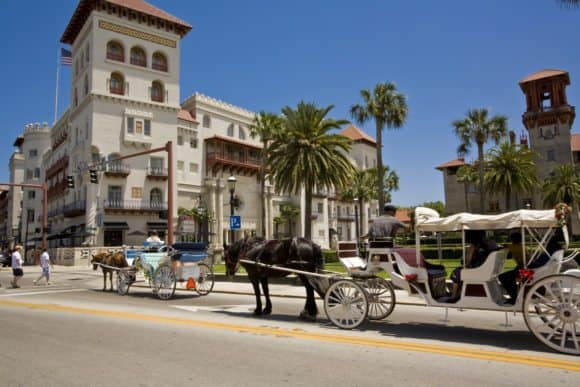 Carriages on King Street with Casa Monica in the background.

St. Augustine’s Casa Monica Resort, originally named the Cordova Inn, was Henry Flagler’s first hotel; he purchased it from the original owner in 1888, as part of his expanding railroad empire on the Florida’s east coast. It’s appreciated today for its frescoes, fountains, and convenient location. Now restored to its past glory, it’s part of the Marriott Autograph Collection. (Pet friendly for a fee.)
Tip for visiting: Casa Monica offers tours of their antique car collection. 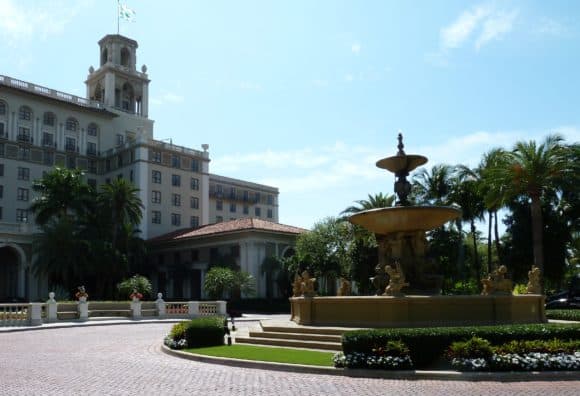 The Breakers Hotel in Palm Beach, one of the grandest and most famous historic hotels in Florida because it was built by Henry Flagler.

But if you crave an unforgettable, over-the-top experience, book a room at another hotel constructed by Henry Flagler, The Breakers, the grande dame of Florida’s grand hotels, which opened in 1896. Located in upscale, affluent Palm Beach, it was designed in Italian Renaissance style with 550 rooms and is located on 140 acres of manicured lawns, gardens, statuary, and fountains, and a half-mile of oceanfront. The painted ceiling in the lobby will take your breath away. Flagler also built himself a home not far away in 1902, which he called Whitehall, and is a museum in his honor today.
Tip for visiting: Check for off-season summer rates. It will still be a splurge, but a smaller one.

Also in Palm Beach is the smaller, more intimate 80-room Brazilian Court, designed in Spanish colonial style in 1926. You’ll love the beautiful courtyards, fountains, and lush tropical landscaping, and you can dine on an outdoor terrace at their award-winning restaurant, too. Your pet is welcome here, and there’s even a turn-down service. 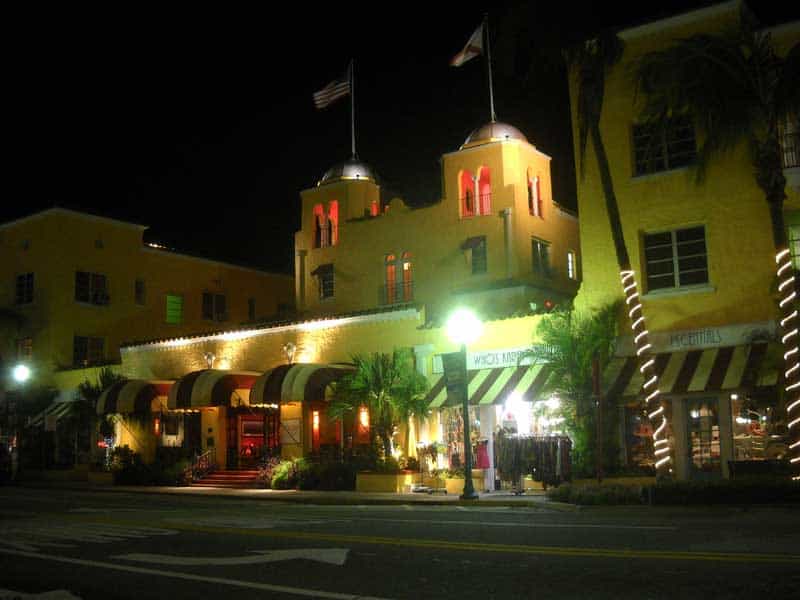 Colony Hotel on Delray Beach’s Atlantic Avenue, is one of the more affordable of the historic hotels in Florida. (Photo by David Blasco)

The Colony Hotel and Cabana Club, with its 70 rooms right on Atlantic Avenue in Delray Beach, also opened in 1926; the Cabana Club, directly on the ocean, is two miles away. This lovely hotel is distinguished by a yellow exterior with red and yellow-striped awnings, and you’ll find many original details and furnishings inside, including an old-fashioned elevator. Privately owned since 1935, the hotel prides itself on being environmentally responsible. Pet friendly. 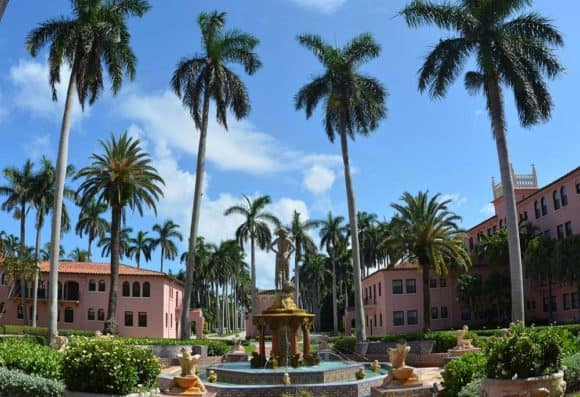 Continuing south, you’ll find the Boca Raton Resort and Club,  named the Cloister Inn when it first opened, also in 1926. Designed by famed “society architect” Addison Mizner to resemble Spain’s Alhambra Palace, it’s breathtakingly opulent and ornate. (The Palm Court ceiling will remind you of a Victorian conservatory.) Located on 356 acres, the hotel offers a choice of bungalows, towers, and suites, along with 11 restaurants and bars.  Many activities are available for children and adults, and its spa was voted the best in the world.
Tip for visiting: Boca Raton Resort offers a 1.5 hour tour with an emphasis on Addison Mizner’s architectural role. Reservations required.

Further south on the east coast, George E. Merrick developed Coral Gables during these land boom years. He chose a distinctive Mediterranean Revival Style for his “city beautiful” and included elaborate entrance gates and a huge Venetian-style pool, complete with a bridge and look-out tower—still in use today. The 275 room-Biltmore Hotel was his centerpiece. Soaring over 30 stories, it was the tallest building in Florida when 1500 guests attended the opening celebrations amid flowing champagne in 1926. 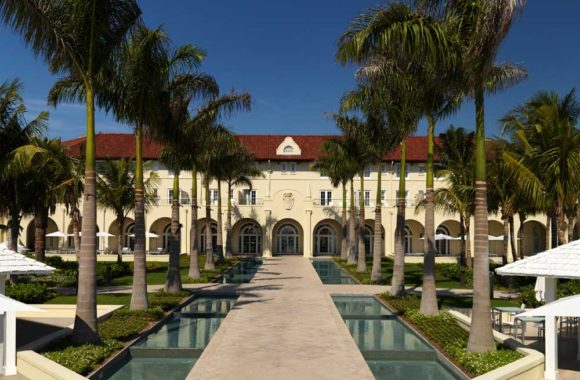 An equally stylish hotel can be found in Key West, the magnificent 300-room Casa Marina. After Flagler had extended his railroad all the way to Miami, he began construction of the Overseas Railroad. This was a monumental effort in 1905, which involved importing special construction materials and hundreds of workers—and Casa Marina was vital to his plan. Billed as a “hurricane proof” hotel, it opened in 1920 and featured immense ballrooms and lavish tropical landscaping, plus a golf course and two pools. It’s now owned by the Waldorf Astoria chain.

There were once many more grand hotels, of course, but over the decades, some have succumbed to fire, hurricanes, developer’s greed, and the ravages of time. Some, despite public outcry, have been completely demolished, like the Belleview Biltmore Hotel in Clearwater, once called the “White Queen of the Gulf.”

Others have been fortunate enough to have second lives, such as The Tampa Bay Hotel, which is now the Henry B. Plant Museum, and the Ponce de Leon Hotel in St. Augustine, now Flagler College. All show loving and careful restoration, proud reminders of Florida’s elegant past. 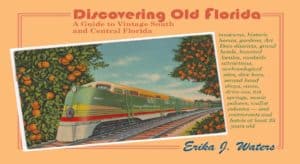 Erika J. Waters, Ph.D, who now lives part of the year in Naples, Florida, was formerly an English professor at the University of the Virgin Islands, St Croix, where she edited The Caribbean Writer and collections of fiction, poetry, literary criticism, and drama. She then taught English part-time at the University of Southern Maine, wrote books on Maine and the Virgin Islands, and was a Fulbright Scholar to Finland.

Since moving to Florida, she’s taught writing and literature at the Renaissance Academy of Florida Gulf Coast University and written for the Marco Island Historical Society. She enjoys kayaking and sailing.

You can order her book, “Discovering Old Florida” here. 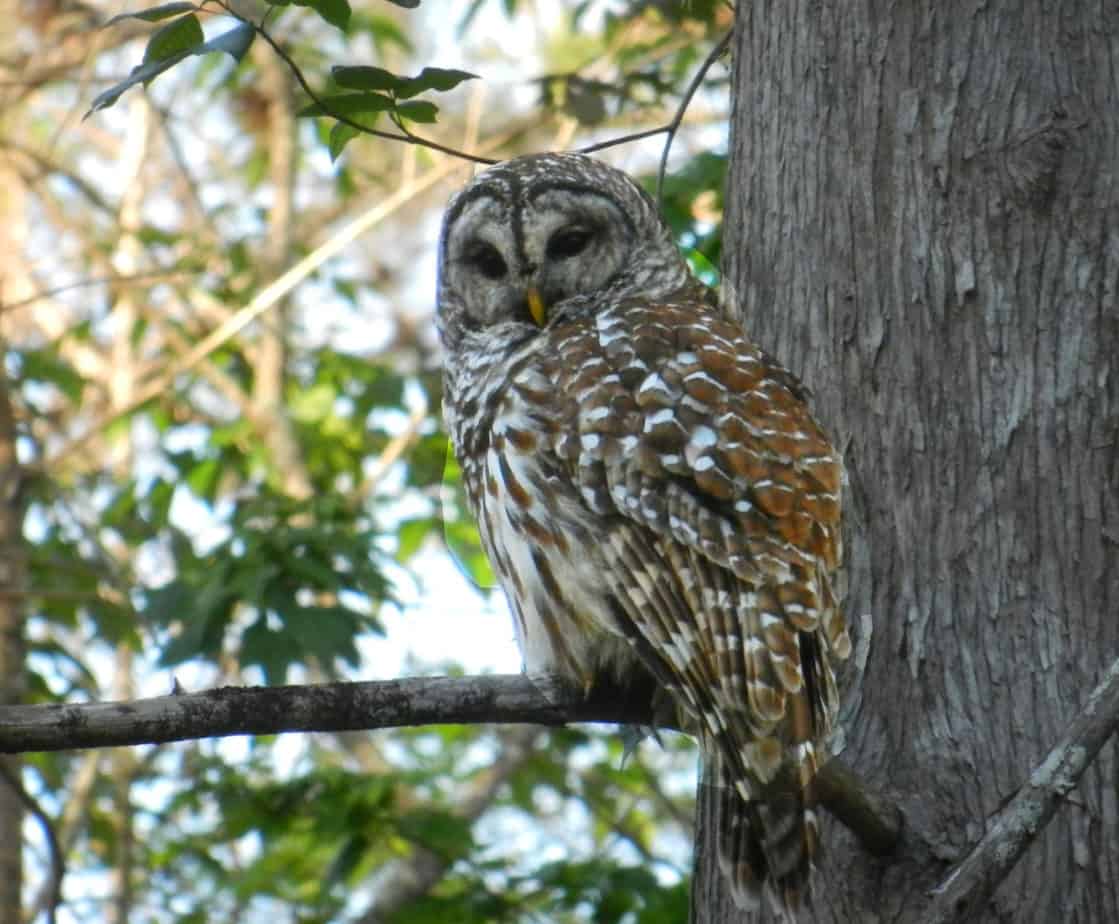 It’s amazing that so many of these historic hotels are still incredible Five Star destinations—it’s a testament to the quality of their construction and craftsmanship. Thanks for sharing!