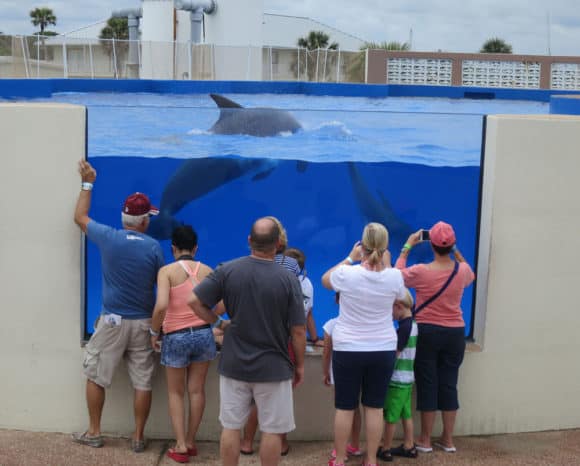 Marineland today focuses on animal-human interactions and education. Marineland was the first oceanarium in the world. (Photo: Bonnie Gross)

Some of Florida’s most interesting sites were originally roadside attractions during the middle of the 20th Century. That’s why we at Florida Rambler were so happy to hear about a new book: “A New Guide to Old Florida Attractions: From Mermaids to Singing Towers,” by Doug Alderson, published by Pineapple Press.

We asked Alderson if we could publish an excerpt. Here’s the fascinating story of the place that first discovered how smart dolphins are — Marineland, which is located between St. Augustine and Flagler Beach, and which continues to operate and re-invent itself.

An old brochure from the Marineland attraction during its heyday.

Perhaps no other Florida attraction has performed the equivalent of a Houdini act with fate like Marineland.

The attraction, opened in 1938 to great fanfare along a remote strip of State Road A1A just north of Daytona Beach, has gone through several transformations, with closures and rumors of closures, only to re-emerge with an altered image.

Many doubted that a facility could be built of adequate size to meet the needs of both large marine animals and filming. The designers proved the skeptics wrong, creating the world’s first oceanarium.

The oceanarium buildings had numerous portholes that enabled visitors and a growing number of marine researchers and film crews to peer into an undersea world as if in a submarine under the sea.

The architecture was described as “nautical moderne.” Writers with the Work Projects Administration (WPA) in 1939 described the tanks with their square portholes as “resembling a stranded Caribbean cruiser.”

During World War II, the attraction closed to the public because both the staff and facility were needed for the war effort.  The Coast Guard worked on developing shark repellent at the oceanarium and a high point on the property was used as a lookout for enemy submarines in the Atlantic.

The post-war Baby Boom was kind to the facility when it reopened to the public in 1946 and it enjoyed several good years. The attraction boasted the first successful dolphin birth in human care in 1947, a dolphin named Spray.

Behind the scenes, using a sonagraph, Marineland researchers were the first to measure and record dolphin echolocation and other sounds, an effort that continues as scientists seek to break the code of dolphin communication. 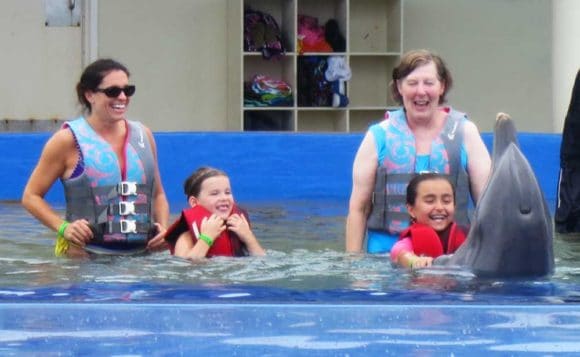 Marineland also came upon something quite by accident that would help to emblazon its image in the eyes of the public. Handlers noticed that dolphins in the oceanarium seemed highly intelligent and were doing tricks and maneuvers at feeding time, perhaps seeking extra fish. By holding fish higher and higher, dolphins would oblige by jumping and leaping.

A question was posed, “Can a dolphin be trained?” 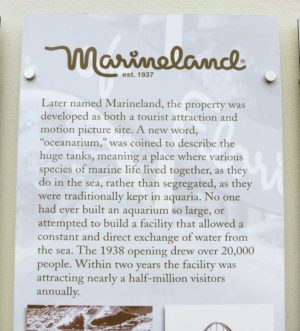 In 1949, veteran circus animal trainer Adolf Frohn was hired in a first-ever attempt to train dolphins, focusing on a highly intelligent dolphin named Flippy. By 1951, Flippy had learned six behaviors as part of the world’s first aerial dolphin act: ringing a suspended bell, honking a bulb horn, catching a football,  raising a flag, towing a surfboard with either a small dog or girl aboard, and bursting through a paper-covered hoop. Frohn even trained Flippy to swim onto a stretcher for medical care, another first.

Marineland stayed true to its roots as a film studio. It helped produce feature films, such as underwater footage for Creature of the Black Lagoon in 1954 and the sequel, Revenge of the Creature, in 1955.

Underwater scenes for the television series “Sea Hunt” were also filmed at Marineland, followed by a Benji television movie in which the canine star scuba dived with a large glass dome over his head, a first. During these glory years, the attraction often drew more than 300,000 visitors annually. Celebrities of the time, Ernest Hemingway and Marjorie Kinnan Rawlings among them, visited the attraction’s Moby Dick Lounge.

Marineland’s pioneering success led to an expansion of the concept, the first being the Miami Seaquarium, opened in 1955. The new rival lured away several key dolphin trainers who eventually created the world’s best known dolphin—Flipper. Flippy had difficulty competing with a television star. 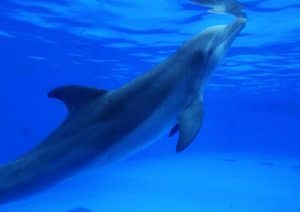 Still, Marineland persevered and remained one of Florida’s top attractions during the 1960s and into the 70s. Because the surrounding town was called Marineland, Marine Studios was changed to Marineland in 1961 so it would be on all the maps.

The emergence of SeaWorld Orlando in 1973, a mega marine theme park, took the biggest bite out of Marineland’s attendance.

The attraction went through several owners, closed briefly in 1999 due to Hurricanes Floyd and Irene, and closed longer in 2004 due to damage from Hurricanes Charley, Frances and Jeanne.

While planners worked on a design to create more hands-on experiences with marine mammals at the facility, several of the historic structures and exhibits had to be demolished and some of the property was sold to the Trust for Public Land to be turned over to Flagler County for a park.

Many believed the world’s first oceanarium would suffer the same fate of Six Gun Territory and other Florida attractions, but Marineland morphed again. A new 1.3 million gallon facility was built that focused more on animal-human interactions and education.

When the park reopened in 2006, it was known as Marineland’s Dolphin Conservation Center, and in 2011 it was sold to Georgia Aquarium and renamed Marineland Dolphin Adventure. Today, guests can swim with dolphins for a half hour (the Immersion), touch and feed dolphins, become a trainer for a day, and enjoy other close encounters, including holding a canvas over the water and allowing a dolphin to paint a masterpiece with three primary colors. Or, they can pay a more modest admission fee to simply watch dolphins.

In touring the revamped Marineland Dolphin Adventure with my guide, Education and Community Development Manager Terran McGinnis, I missed many of the historic buildings that I remembered from past visits but enjoyed the frolicking dolphins in the more accessible pools that have been built.

“It was always our intent to keep the historic buildings,” said McGinnis, “but the 2004 hurricanes did enough damage that engineers deemed them unsafe and non-salvageable. It was heartbreaking.” 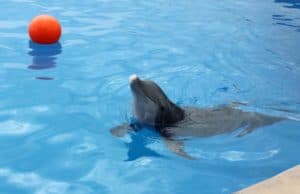 Even though this is not the Marineland of the past, the attraction’s mission is evolving and becoming more expansive. Besides the focus on dolphin interactions, Marineland is seeking to breed increasingly rare sand tiger sharks.

“Our ability to pull in ocean water just as the original Marine Studios did, with seasonally fluctuating light and temperature conditions of our outdoor habitats, may provide just the right environment for these animals,” said McGinnis. 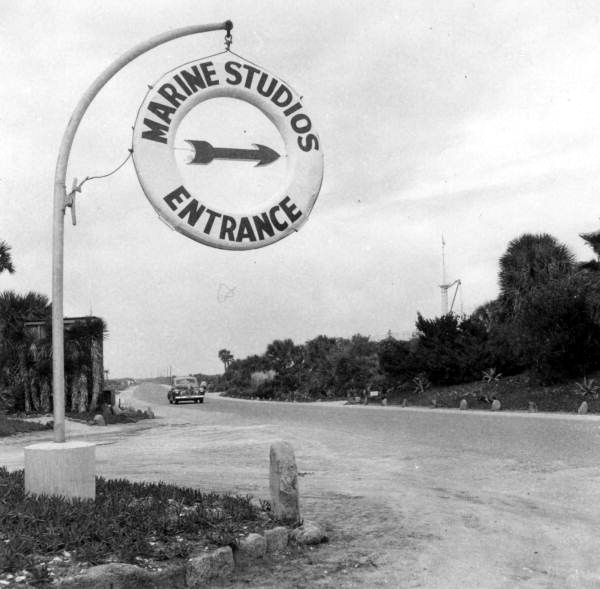 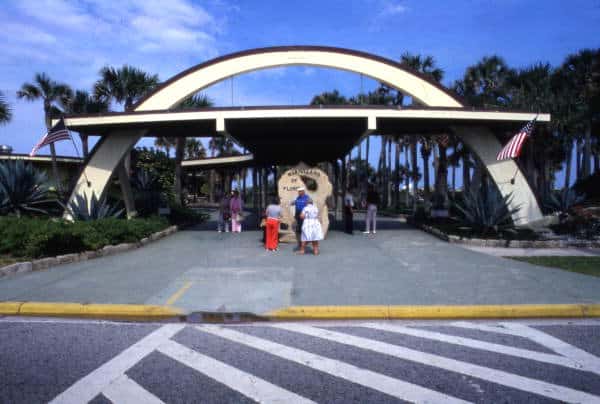 Visitors at the entrance to the Marineland attraction. State Archives of Florida, Florida Memory. 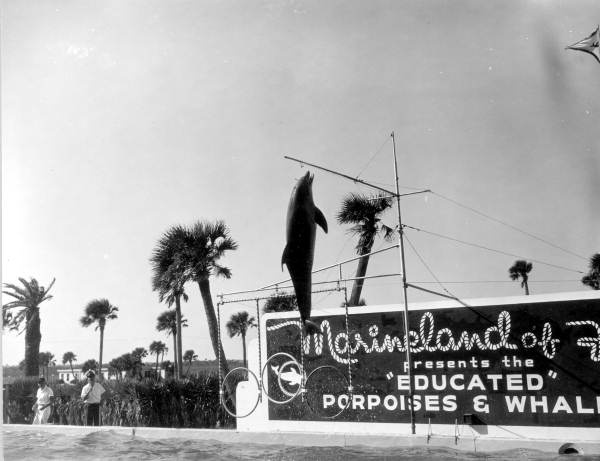 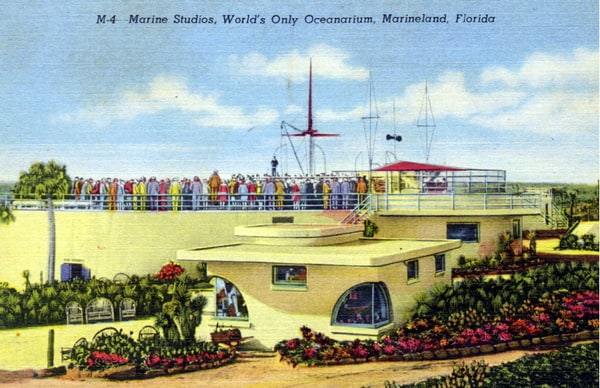 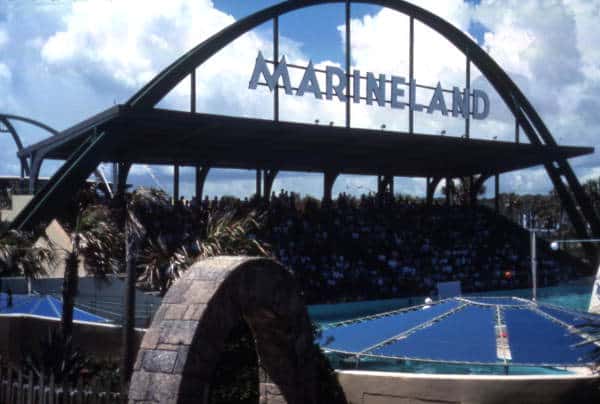 View of the spectator stands at Marineland during its heyday. State Archives of Florida, Florida Memory. 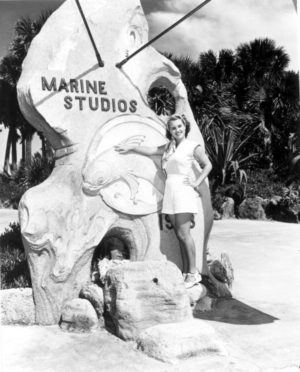 Marineland takes in injured sea turtles and they are seeking to develop a touch tank with spotted eagle and cow nose rays.

For the dolphin facility, various tanks are connected with gates and channels that allow animals to be together, or divided into social groups as circumstances may require, often changing throughout the day. Certain dolphins may be in a tank because they play well together, or breeding may be desired, or a mother dolphin is nursing an offspring.

“We have a healthy social group of dolphins and breeding behavior is a sign of the health of this community,” said McGinnis. “I have had the opportunity to see many babies born here over the years, usually in the middle of the night.” There has been a voluntary moratorium on collecting wild bottlenose dolphins since the 1980s.

“Because of preventive health care, we have dolphins living here into their forties, fifties and sixties,” said McGinnis. Nellie, a Marineland dolphin that recently passed away at age 61, was the oldest known dolphin to have lived in human care.

And while Marineland is all about encouraging humans to interact with dolphins at the facility, “in the wild, the kindest thing you can do is to give them space,” said McGinnis. “That is a priority for us. We don’t want people generalizing their interaction with these dolphins to interacting with wild dolphins.”

Part of Marineland’s education program revolves around the Marine Mammal Protection Act of 1972. This includes informing people that feeding dolphins in the wild in prohibited. “They begin to associate people in boats with food, and as a result, they can be struck and injured or killed by boats.”

And while Marineland’s dolphins, like most animals in human care, will never know the wild and the risks associated with it, McGinnis views Marineland’s role as motivating people to care about dolphins and other marine life.

“The core issue is protecting this planet,” she said. “We fill a particular niche for those people who need direct contact with animals to find the inspiration to tread more lightly on the planet.”

And that’s something Marineland has been doing since 1938.

Things to do near Marineland:

Order the book “A New Guide to Old Florida Attractions: From Mermaids to Singing Towers,” by Doug Alderson, published by Pineapple Press. 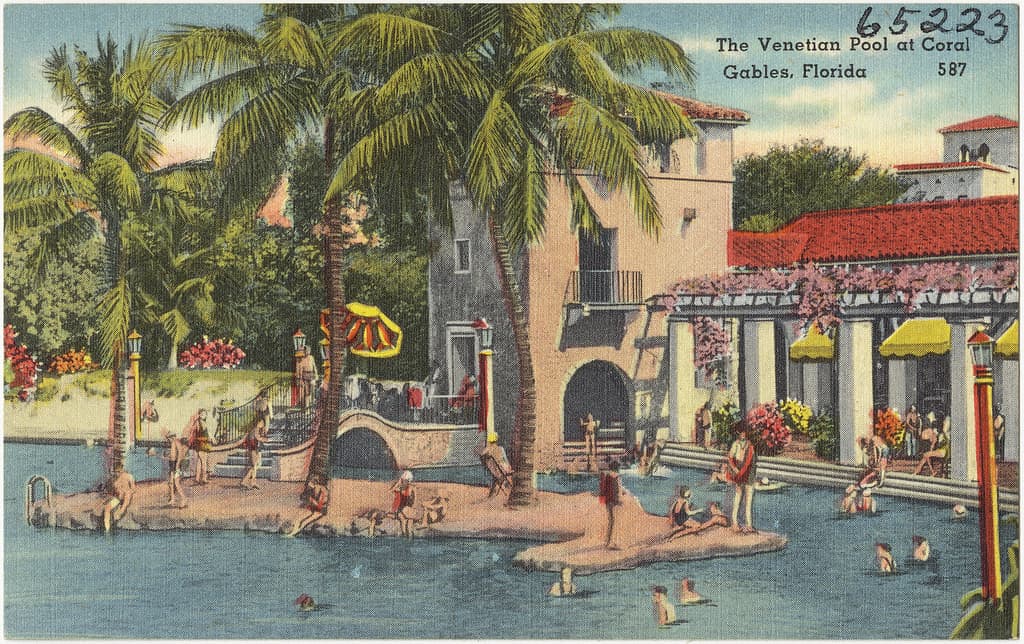 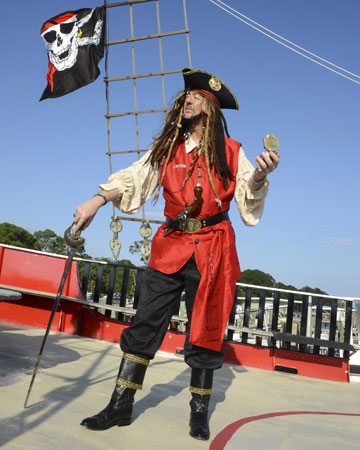