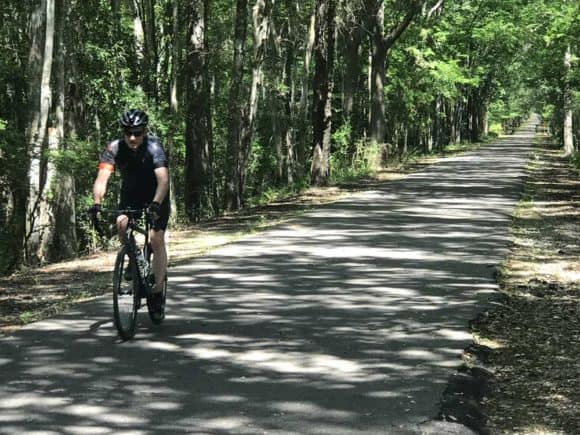 One of the best Florida bike trails – the Jacksonville-Baldwin Rail Trail – is a well-shaded rural trail that makes a stop at a rare-for-Florida Civil War site.

We like to bring our bikes on our rambles around Florida, so the Jacksonville-Baldwin Trail has long been on my to-do list. 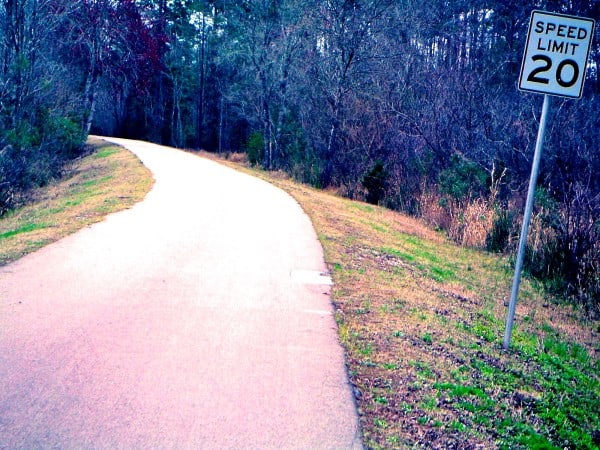 An unusual sign for a bike path: A speed-limit sign, along Jacksonville-Baldwin Rail Trail.  (Photo by Chuck Morlock)

The Jacksonville-Baldwin rail trail is a paved trail following a former railroad line that begins just west of Jacksonville and extends 14.5 miles west to the town of Baldwin. It has full facilities near the middle at Camp Milton Historic Preserve, a Jacksonville city park, which makes a great stop for a picnic and some exploration. 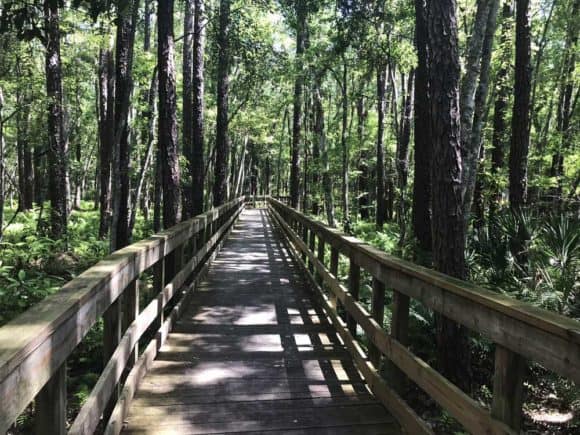 This long boardwalk gets you from the washroom/rest stop to Camp Milton along the Jacksonville-Baldwin Bike Trail. On this side tour, you can learn about Florida’s role in the Civil War. (Photo: Bonnie Gross)

Camp Milton was the base for 8,000 Confederate troops who were defending against the Union troops who had taken Jacksonville. The Confederates erected three miles of earth and timber fortifications, traces of which have been found. Today you can see those traces (there’s not much left) as well as a re-creation of a late 19th-century homestead, a replica bridge, an arboretum and boardwalks.

The trail goes through several habitats, past two creeks and wetlands and at times the tree canopy forms a tunnel over the pathway. 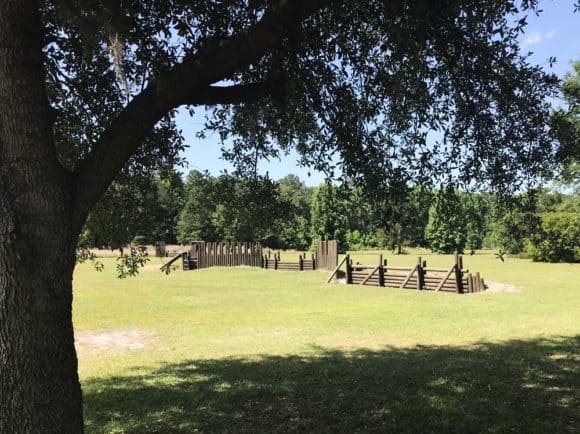 Camp Milton recreates how fortifications might have looked during the Civil War. It’s a stop along the Jacksonville-Baldwin rail trail. (Photo: Bonnie Gross)

Here’s a report on the trail from fellow blogger Chuck Morlock:

“The first three miles of the Jacksonville-Baldwin State Trail out of Jacksonville run along power towers, and for the first four miles or so you travel past residences, businesses, and small ranches, but then there are only occasional glimpses of civilization and only a few road crossings as you traverse a beautiful forest. Since this is an old railroad grade, the trail is basically flat with only gradual rises and dips.

“This is one of only a few trails I’ve biked which had highway-type speed limit signs (see photo) probably because it is maintained by the Florida Department of Transportation.”

“West of Helsema Road, signs warn of a nearby gun club, and I heard some gunfire in that area. (A skeet shooting facility is located nearby.)

“A new motorcross park is also near the trail and you can stop and watch the motor bikes jumping huge mounds of earth. “ 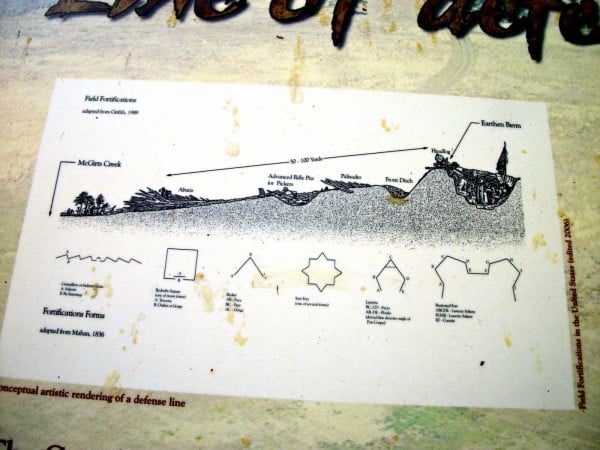 Signs explain the fortifications that were part of Camp Milton. (Photo: David Blasco)

Mudfish at 100FloridaTrails.com recommends starting your bike ride at Camp Milton because it has ample parking, good facilities and “this puts you in one of the nicest, shadiest sections of the trail” – from Camp Milton west to Baldwin. A paved path parallels Halsema Road leading to the bike trail.

Mudfish recently rode the trail and wrote to us with a little update: “We were impressed with some of the upgrades along the trail, especially at the trailheads.” While he still likes parking mid-trail, he said the brand new trailhead at Halsema Road is also a nice option.

While at Camp Milton, watch for birds. The site was recently added to the Great Florida Birding Trail. Eastern bluebird, eastern meadowlark, palm warbler, and loggerhead shrike can be found in and around the fields by the entrance. Raptors like bald eagles, American kestrel, and sharp-shinned hawk (winter) may be spotted overhead. Check the creek area for songbirds like blue-gray gnatcatcher and Eastern phoebe.

Folks who have reviewed this trail at Trailslink.com add these useful comments:

A two-minute video on the trail:

Planning your visit to the Jacksonville-Baldwin Rail Trail

Eastern trailhead/Imeson Road trailhead:  From I-295 North, take  Exit 9/Commonwealth Avenue. Drive west on Commonwealth about 1 mile to Imeson and turn right. The marked trailhead is on the left. 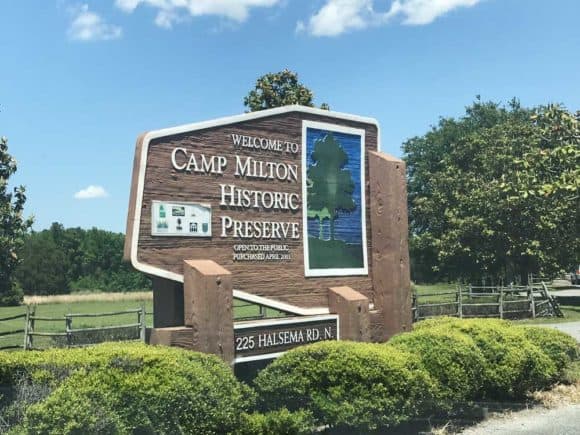 Note: There is no entry or parking fee at trailheads or at Camp Milton.

Florida Rambler on more things to do near Jacksonville:

The Kingsley Plantation: A slavery story that could happen only in Florida

Battle of Olustee re-enactment, every February