Re-enactment of the Battle of Fort Mose. 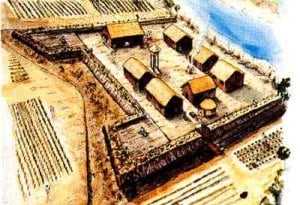 If you listen carefully, tuning out the noise from the park’s boardwalk and picnic areas, you can almost hear the sounds of North America’s first legally sanctioned free black settlement.

Whether it’s the sounds of hammer beating molten iron at the blacksmith, the squeals of children or the cadences of the local militia, the village of El Pueblo de Gracia Real de Santa Teresa de Mose attracted blacks — slave and free — from Africa, Spain and the Americas. More than 100 men, women and children once lived in the old fort that protected St. Augustine.

Fort Mose was built in 1738, and its occupants found refuge from the harsh life of slavery by joining the Catholic Church and pledging allegiance to the king of Spain. In 1763, when the British took control of Florida, the residents of Fort Mose left for Cuba, and freedom.

Today, the old fort is a 40-acre waterfront park located east of U.S. 1 just north of St. Augustine. It houses a picnic areas, a marina for canoeing and kayaking and a boardwalk where birders can see White Ibis, Great Blue Heron and Bald Eagles. The remains of the earlier settlement are long gone, but the significance of Fort Mose Historic State Park should not be lost to history.

The Defense of St. Augustine

The original Fort Mose may have been built by Spain to defend St. Augustine, but as the first community of free black men and women in North America, it served as a haven on the original Underground Railroad for runaway slaves who fled from the harsh plantation life to the north.

On Saturday, March 19th, the Fort Mose Historical Society, the Florida Department of State and Florida Living History Inc., a nonprofit dedicated to educating the public about the state’s colonial and territorial history, will hold its Third Annual Commemoration of the Founding of Fort Mose. The celebration marks the fort’s 278th anniversary and includes a stirring re-enactment of the proclamation that established the settlement and named the community’s first leader.

The event runs from 10 a.m. to 3 p.m. and will feature colonial Spanish military drills, the demonstrations of weapons, and food and crafts from the 18th century. The activities also include The Discovery and Public Impact of Fort Mose lecture by Darcie MacMahon of the Florida Museum of Natural History. McMahon participated in the initial archaeological excavations of the fort.

In addition, copies of King Carlos II of Spain’s 1693 proclamation giving freedom to black refugees fleeing slavery and Spanish Florida’s Gov. Don Manuel Montiano’s 1740 letter to King Felipe V of Spain, discussing the role the fort and its free black militia played in defending St. Augustine during the British invasion of Spanish Florida will be on display.

Admission to the event is free of charge. There is a $2 admission fee to the park’s museum for adults; children 5 or younger are admitted to the museum for free.

[mappress mapid=”423″ alignment=”right”] The re-enactment is just another reminder of the rich black history of North America’s oldest city. When Spain regained the Florida territory after the American Revolutionary War, the seeds of an enduring black community in St. Augustine were planted, beginning with a free black community that readily accepted newcomers from the American colonies and the Haitian revolution.

The one-time center of black business and residential life, Lincolnville, is listed on the National Register of Historic Places and the Florida Black Heritage Trail, and there have been efforts to restore some of houses in the area. The Andrew Young Crossing sits in the midst of the city’s historic district and commemorates the 1964 march led for civil rights that ended in violence.

Race played a major role in shaping what is now Florida. Under Spanish rule, blacks not only found asylum from slavery but a comfortable enough life that black men were willing to protect it by serving in the militia to protect Spanish Florida from the British. The struggle between two countries led to the creation of Fort Mose, and ultimately its undoing.

On March 19th, the fort and its importance will be revived and celebrated through an historic re-enactment.

Douglas C. Lyons, a longtime journalist in Florida, wrote this for the Florida Rambler.

Kayaks/Canoes — Launch from a floating boardwalk platform east of the museum. You can also paddle here from other locations and tie up for the day’s activities. The boardwalk is on a tributary of the Tolomato River and is subject to tidal variations.

Palatka-to-St. Augustine State Trail — This 8.5-mile multi-use paved trail will eventually course 19 miles through St. Johns and Putnam counties. Trailhead is on the north side of State Road 207, just west of Interstate 95 Exit 311. The trail runs through the communities of Armstrong, Elkton, and Vermont Heights, west of St. Augustine. Open from 8:00 a.m. until sundown, 365 days a year.

Anastasia State Park (Public), 1340-A State Road A1A South, St. Augustine — Four miles of pristine beach and historic St. Augustine make this state park the perfect layover for visitors to the nation’s oldest city and hike through snow-white dunes, bicycle on the beach, paddle, sail or fish. Anastasia State Park has 139 camping sites for RVs and tents. Sites are in the hammock forest, away from blowing sand and salt spray, but most are within easy bicycling or walking distance from the beach. Eleven miles from I-95 Exit 311; Camping Fee:  $28; Reservations: Up to 11 months in advance. Call  800-326-3621 (8 am to 8 pm) for reservations

Faver-Dykes State Park (Public), 1000 Faver-Dykes Road, St. Augustine  — This tranquil park borders Pellicer Creek into the open marshes that frame the Intracoastal Waterway south of St. Augustine, and it’s just a hop and a skip off I-95. The campground has 30 sites in a shady hardwood hammock, each buffered from neighboring sites by natural vegetation. Each site has water, electric, fire circle with grill and a picnic table. A dump station is in the campground. Pets allowed.  Max RV length is 30 feet. The kayak trails here are spectacular. One mile from I-95 Exit 298, Camping Fee: $18; Reservations: Up to 11 months in advance. Call  800-326-3621 (8 am to 8 pm) for reservations.

North Beach Camp Resort (Private), 4125 Coastal Highway, St. Augustine — With 1,000 feet of river front directly across the Intracoastal Waterway from Fort Mose Historic State Park, this private 60-acre campground with all the amenities is perfect for paddlers and boaters who will visit Fort Mose by water. The campground has 10 sites for tents and 130 gravel-based RV sites with 30-amp and 50-amp hookups. If you don’t have a boat, you can rent one. Pricier than the state parks cited above, you get what you pay for. Rates range from $46 a night for a 20-amp hookup to $86 for a riverfront site with 50 amps. The campground also offers well-appointed “camping” cabins for $110 to $150 per night. Weekly rates are available. Reservations recommended. Call 800-542-8316.

Nearby B&Bs and other Places to Stay

St. Francis Inn, 279 St George St, St. Augustine — The pond in the garden of the St. Francis Inn is fed by an artesian well and is home to colorful koi fish. With 26 B&Bs in town, historic St. Augustine is the perfect place for the bed-and-breakfast experience. Built in 1791, the St. Francis was first used as an inn in the 1840s. It has been owned by more than 20 families over the centuries, but the same friendly couple has owned and operated it as a B&B for 30 years. The St. Francis Inn is located on a quiet residential brick street in the historic district, walking distance to restaurants and attractions. It has bikes for guests, a pool and is beautifully landscaped with interesting tropical plants. St. Francis Inn, 279 St George St, St. Augustine, (904) 824-6068. Rooms range from $149 to $329.

Things to Do Near Fort Mose