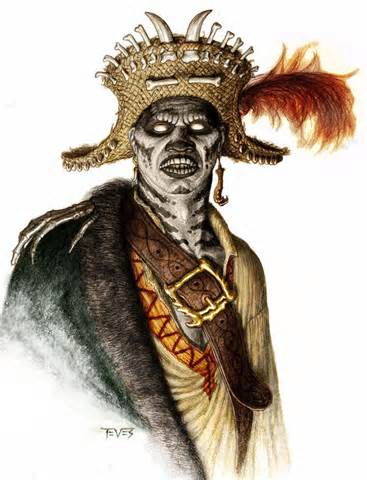 Legend has it that Elliott Key was once home to a notorious pirate who preyed on passing ships. Black Caesar, the story goes, used the island and other hiding places along the Southeast Florida coast to conduct raids on villages or attack unsuspected ships.

While the life of this 19th century pirate has the makings of a box office hit, it makes for a difficult biography.  As fantastic as it is, the legend of Florida’s most renowned black pirate largely depends upon who is telling the tale.

The dramatic tale of Black Caesar

To hear some tell it, Black Caesar was an African war chieftain of huge size, immense strength and keen intelligence.  He spent years evading capture by slave traders, but somehow got tricked into boarding a ship to obtain treasure.

Distracted by the promise of riches, the chieftain and his men failed to notice that the crew had pulled up the anchor. By the time they realized the deception, the ship was far from shore. The black men were subdued and captured, and the traders set sail for the West Indies in hopes of selling their captives into slavery.

Unfortunately, the ship ran into a hurricane off the Florida coast. By then, Black Caesar had befriended one of the white crew members who freed him amid the chaos of the storm. The pair escaped in a longboat loaded with ammunition and supplies. The two survived; the ship and those left on board did not.

Using their longboat, the two men began posing as shipwreck sailors, hailing passing vessels for help. Once the ships came close enough, the pair pulled their guns and robbed their would-be rescuers. This scheme went on for years, until the two men had a falling out over a woman that resulted in a duel.

Black Caesar killed his longtime friend and over time took on more pirates and began attacking ships on the open sea. Legend had it he amassed a fortune, not to mention a harem of 100 women and a prison for men he hoped to ransom.

Ultimately, this Black Caesar joined the crew of another notable pirate, Blackbeard. He was captured after Blackbeard died at the hands of Lieutenant Robert Maynard in 1718.  Arrested and taken to Williamsburg, Va., Black Caesar was hanged for his crimes, thus ending one colorful account of the pirate’s life.

But wait! There’s another version Henri Caesar is another variation of the Black Caesar saga. He was born a slave in Haiti. As a young man, he was mistreated by a supervisor in a lumber yard and later killed him during the slave insurrection. He remained a part of the island’s underground freedom fighters until Haiti won its independence from France.

Shortly after Haiti became free, Henri Caesar left the island to seek his fortune at sea. He captured a Spanish ship and sometime after 1805 began attacking small villages and lone vessels around the Bahamas and Cuba. He operated out of the southern part of then-Spanish Florida and adopted the nickname, Black Caesar.

As a pirate, this Black Caesar supposedly buried between $2 million and $6 million in treasure on several islands, including Marco Island, Sanibel, Pine Island and Elliot Key.

He disappeared around 1830, and the stories explaining why vary. Some say he fled after the U.S. took possession of Florida; others believe he was captured, taken to Key West and burned to death by authorities.

What about buried treasure?

And then, there’s the writer Albert Payson Terhune, an early 20th century novelist and author of the book, “Black Caesar’s Clan.” His 1921 mystery takes place in a fictional tract of marsh and mangrove near Miami and features a savage black family named the Caesars who claim to be direct descendants of the infamous “negro” pirate. It made for great reading, back then.

What is not in dispute is that nearly 5,000 pirates sailed the Florida Straits and the Gulf Coast between 1715 and 1726,  and historians believe 25 to 30 percent of them were either black slaves who fled their Spanish masters or were former slaves freed from their captors by other pirates.

To date, the cays and islands that make up the Upper Keys have yielded little evidence of the existence of Black Caesar’s lair. Still, his legacy can be found in Biscayne National Park at Caesar’s Rock, a nondescript rock in Caesar’s Creek, a channel that separates Elliot Key from Meigs Key. Both are named after Black Caesar.

Although many have searched these islands for buried treasure, no one has yet found it.

What the area does offer is some of the best fishing and underwater vistas that come with Biscayne National Park, the nation’s largest underwater park.

The irony of Black Caesar’s story should not be lost on anyone. As a slave, Black Caesar would have been condemned to a life of obscurity and humiliation. Instead, he has found a larger-than-life existence as a pirate.

With over 500 species of fish, the park’s underwater diversity is unparalleled. Add corals, butterflies, birds, and manatees, and Biscayne is a prime destination for wildlife viewing, including underwater wildlife and birding. 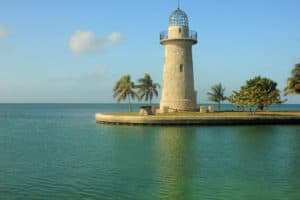 Guided boat tours depart from the park’s Visitor Center on select Fridays, Saturdays and Sundays. Departure times are 10 am and/or 1:30 pm. The boat tours cost $29 plus tax for adults and $19 plus tax for children 5-12. Admission is free for children age 4 and under, when accompanied by a ticketed adult. Advance reservations are advised, but you can book a trip at the Visitor Center. Call 786-335-3644.

The boat tour lasts about three hours with visits to Boca Chita and Elliot Key, allowing passengers to go ashore to check out the lighthouse on Boca Chita. A park ranger is on board to talk about history and wildlife of the area.

Small, all-day sailboat excursions: The sailboat tour is longer and pricier: All day excursions on a sailboat carrying six people for $145 per person. These tours will leave at 10 a.m. and return at 4 p.m. These trips will include opportunities for swimming, snorkeling, island hiking, kayaking or paddle boarding.

These tours involve sailing on the bay for a few hours, a stop at either Boca Chita or Adams Key, where guests can use stand up paddleboards or kayaks to explore mangrove tunnels and nearby waterways. Guests can hike on trails on the islands and swim at small beaches on each island. Read more: Boat tours are back at Biscayne National Park 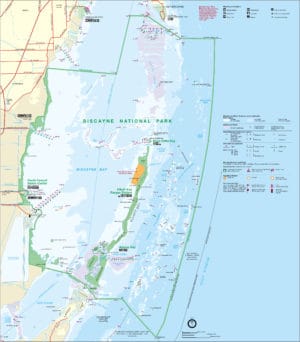 Camping — There camping both on Boca Chita and Elliott Key, but they are not accessible by car. You need a boat to reach the islands. The fee is $25 per night including tent site and dockage for a boat in the harbor. No reservations: it’s first-come, first served. The islands are notorious for mosquitos, particularly in the summer rainy season. Camping and docking fees are waived from May 1 to September 30.

Both islands are excellent bases for exploring the islands around Caesar’s Creek, the channel at the south end of Elliott Key where Black Caesar was said to have established his lair.

Canoe and Kayaking — Much of Biscayne Bay is shallow, ideal for kayaks and canoe exploration with the bay’s bottom visible to paddlers.  Take your time and paddle around the outside of the bay from the park’s headquarters in Homestead.

Experienced kayakers may want to paddle 7 miles across the open bay to camp at Elliot Key or Boca Chita Key, but be aware of the hazards of such a journey. Open bays lend themselves to sudden gusts of wind and surf, not to mention unexpected storms.

Snorkeling and Diving — Snorkeling from the shoreline is permitted, but the water is extremely shallow, with a seagrass and mud bottom. Seagrass communities are full of life, but much of it is tiny and requires patience to discover. You can borrow a free dive flag from the Visitor Center if you’d like to try snorkeling from shore. The park’s coral reefs are approximately 10 miles from the mainland, so visiting the reefs will require access by boat. Here’s a link to a charter boat that will take you out there: South Beach Divers.

[…] has been described as Florida’s most renowned black pirate who used the island of Elliott Key, and other hiding places along the Southeast Florida coast to […]

Albert Payson Terhune also wrote the Lad, A Dog series of the Sunnybank Collies. His books were childhood favorites.