Rooted in the boisterous days of pirates, wreckers and rum runners, inebriation is an established ritual in Key West, celebrated today by locals at favored watering holes away from the tourists crawling Duval Street.

Do you want the true flavor of today’s Key West with a flicker of its past?

Mix with locals by venturing out to these off-the-track Key West bars where the island’s diversity blossoms.

This guest post was written by Karuna Eberl and Steve Alberts, who live on Cudjoe Key in the Lower Keys, and bring a local’s perspective to their entertaining book “Key West & the Lower Keys Travel Guide.”  Here is an excerpt from their book. 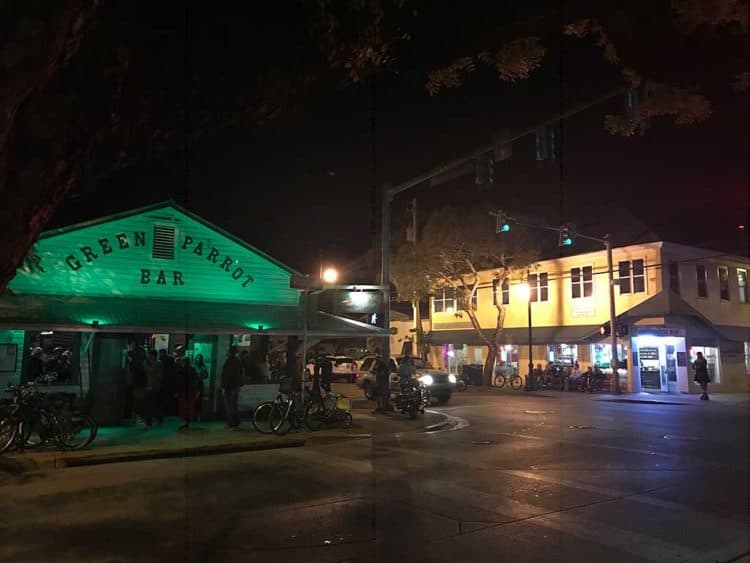 Claimed to be the town’s oldest drinking establishment, the Green Parrot is second home to fishermen, vagabonds, hippies, sailors, bachelorettes, vacationers, and lovers of life of all sorts since 1890.  It’s most happening on Friday and Saturday nights, with some of the best live music in town.  At other times, it’s a good hangout with a pool table, dart board, jukebox, and free popcorn. The Parrot is a true locals bar that doesn’t mind an influx of visitors. Open 10 am to 4 am daily. 601 Whitehead Street, 305-294-6133, www.greenparrot.com. 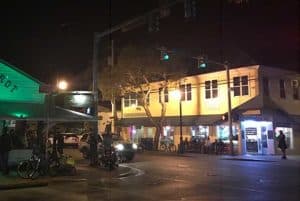 The “Bench” is Key West’s version of Paris’ Café de la Paix, where it is said if you hang out long enough, you’ll see everyone in the world worth knowing pass by. Just across the street from the Green Parrot Bar, the Bench is where a great deal of the Parrot’s social scene takes place. Sit out here to listen to live music while conversing with strangers. Anything might happen here, from a game of giant Jenga to someone pole dancing on the lamppost. Though there is no official bar at the bench, there are many purchased or undercover home-poured drinks in hand. Across Whitehead from the Green Parrot. 600 Whitehead St, Key West. courthousedelikw.com Post your pictures on their Facebook page.

Durty Harry’s — Where the Locals Don’t Admit to Going 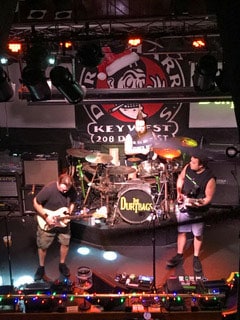 At first glance, Durty Harry’s is not an obvious local’s hangout. Tucked inside the Rick’s Bar megaplex, between the strip club and the nightclub, the live music venue features the DurtBags seven nights a week. That’s not exactly where the locals hang out, though. Instead, climb up the stairs to the small set of bar stools overlooking the dance floor and stage. The show is best in season when there are plenty of partiers. The band has performed nearly every night for a decade, but what makes them remarkable isn’t their ability to replicate more than 1,000 songs that define several generations, but rather that every night they make a new batch of strangers completely joyful. Revelers wander in, get a drink, then jump right in, busting out dance moves they haven’t tried in a decade or two, singing the familiar lyrics and letting it all go as they get caught up in the moment. From grandmothers to spring breakers, the band knows how to keep everyone happy. Just don’t ask them to play Freebird, unless you are willing to pay the mandatory $400 tip. 202 Duval Street, (305) 296-5513 ricksbarkeywest.com/pages/durty-harrys

With historic tall ships docked on one side and a bar and live music on the other, Schooner Wharf is a welcoming, laid-back island hangout. A long-time staple for locals and visitors alike, the bar also serves as an important anchor to the community, hosting many celebrations and events, plus contributing a couple of vessels to the Conch Republic Navy. The local bands are some of the best around, the dance floor is always active, the food is good, and the view from the upper deck is worth the climb. 202 William Street on the historic seaport, Open 7:30 am to 11 pm (M-Sat); 7:30 am until noon on Sunday. 305-292-3302, schoonerwharf.com.

Do you know a ‘locals’ bar not on our list? Tell us in comments below. 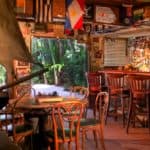 Peanut shells litter the floor, treasure maps hang from the ceiling and years of secrets lie carved into the heavy wooden tables. It is in this tiny bar that Mel Fisher and his cohorts plotted and planned their way to finding the sunken Nuestra Señora de Atocha and the lost 1622 Spanish treasure fleet. Some say it’s also where Jimmy Buffett and Bob Marley played their first gigs. Once adjoining a more modest motel, the Chart Room is now buried inside the luxurious Pier House Resort, but remains true to its roots, proudly serving zero blender drinks along with plenty of free popcorn, hot dogs and peanuts. It’s often half-empty, and the bartenders are not guaranteed to be friendly, but we come here for the ambiance, new friends, and a quieter place to converse. Open 4:30 p.m. to 12 a.m. (M-Th), 4:30 p.m. to 2 a.m. (F,Sa). 1 Duval Street, 305-296-4600. www.pierhouse.com/dining/chart-room-bar

Walk down the alley, then through a little gate in a big white fence, and it almost feels as though you’re ducking into an old-time speakeasy. A short, narrow hallway opens up to a courtyard of cocktails, couches, live music, and dancing. Though it’s attached to the chic La Trattoria Restaurant, the dress code in the back is whatever level of style your heart desires. Locals make Mondays a regular stop for $5 martinis. 524 Duval, 305-296-1075, latrattoria.us

There are only a few seats, mostly filled by hotel guests, so it’s not the place to plop for long, but it’s a fun duck away for a fine cocktail in an elegant setting, which is how my father and I found ourselves there one evening, sipping dirty martinis and plotting our next adventure. 600 Fleming Street, 305-292-1919, marquesa.com. 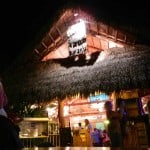 It’s not an oversight that we listed the Hogfish under both restaurants and bars in our guidebook, Quixotic Key West Travel Guide. It earns a spot in each. The bar is where fishermen, treasure hunters and other hard workers go to unwind from the day, play pool, and weave their tales of the sea. Watch the boats come in, pull up a stool, make a few new friends, and munch on some of the freshest seafood bites around. Open 11 am to midnight (M-Sat); 9 am to midnight on Sunday. 6810 Front Street, Stock Island, 305-293-4041, hogfishbar.com. 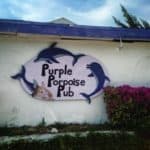 There are dive bars and then there’s the Purple Porpoise. It’s a glorious experience for those who like adventure, are not germophobic, don’t wear expensive jewelry, and don’t take themselves too seriously. If this sounds like you, don’t miss this place. It’s kind of like an abandoned building in which some friendly folks put some coolers of beer and barstools — yes they serve cans of beer out of an Igloo cooler. There is no top-shelf liquor, but there is booze, skee ball and ping pong. Cash only. Mile Marker 9.8, Gulfside, Big Coppitt Key.

Are you a local? Where do you hang out? Let us know in comments below.

Florida is re-opening, but the virus is not gone. Learn how to protect yourself and others.