Best snorkeling in Florida without a boat 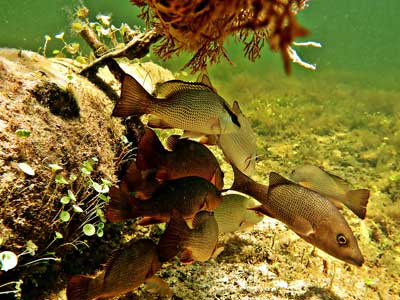 A school of snapper take shelter under a cannon at Cannon Beach at Pennekamp State Park. Photo by PMC 1stPix via Flickr.

Where can you go snorkeling in Florida if you don’t own a boat?

Over the years, I’ve discovered a number of right-from-the-beach snorkeling spots I love to visit in South Florida. While you need a boat to access full reefs in Florida, some of my favorite snorkeling outings have been “shore dives” — places where I can touch the bottom and stand to clear my mask. This sort of snorkeling is good for kids and beginners, too.

Snorkeling in the Florida Keys

You can have fun snorkeling almost anywhere in the Keys — any dock or pier here will attract some fish around its pilings. But I’ve particularly enjoyed snorkeling in these spots:

Most visitors to Pennekamp State Park  head out on the tour boats to snorkel the real reefs, and, truly, there’s no snorkeling off the beach that compares with that. But it’s worth your time to snorkel at Cannon Beach. The park has placed remnants of an early Spanish shipwreck about 100 feet off the beach. Fish congregate under and round the sea-life encrusted cannons and anchor. Snorkelers have seen a variety of creatures, including large barracuda and tarpon. 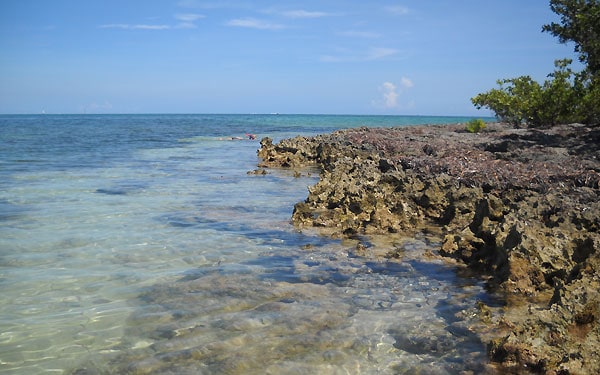 Visiting Indian Key is one of my favorite things to do in the Florida Keys. It’s an island, easily reached by kayak or canoe. You can rent a kayak at nearby Robbie’s Marina; here’s my complete trip report about visiting Indian Key. The island, like all of the Florida Keys, is an ancient coral reef and its shores are sharp, craggy coral rocks that make excellent homes for marine life. To snorkel here, look for a shell-encrusted bench across the small island from the dock. That’s a good place to get in and out of the water when snorkeling.

Pigeon Key, a history-filled island in the middle of the Old Seven Mile Bridge, is worth visiting for its unique site and story. You probably won’t want to pay the $12 admission just to snorkel, but if you do visit the island, bring your gear along.  On a sultry summer day, we snorkeled the waters around the Pigeon Key dock.  We saw schools of colorful fish, but what we liked best was finding remnants of history in the water — stones that were obviously building materials from the era of the railroad tracks’ construction, pieces of metal encrusted with barnacles. Here’s a Florida Rambler report on visiting Pigeon Key. (“Treasures” from the water, by the way, are added to a colorful cart of found stuff on Pigeon Key rather than being removed.)

This beach is popular with locals and it’s also free. The beach is a white sand with palm trees and lots of amenities: changing rooms, restrooms, showers, picnic tables and grills plus a playground. This is a good place to do a little snorkeling from shore, particularly where there are rocks along the shore. These spiny rocks — once parts of a living coral reef — are magnets for fish and all kinds of sea life. The beach is two miles off the main road. To find it, turn south at MM 50 at the light (Publix Shopping Center) and follow Sombrero Beach Road for about two miles to the end. There is plenty of parking.

Zachary Taylor Beach is located where Gulf waters meet the Atlantic in Key West. The water here is generally clear and the bottom is rocky, which makes this a good place to snorkel and see a variety of tropical fish and live coral. (Because of those rocks, it’s smart to bring water shoes.) The state park offers shady areas to relax and the historic fort is well worth exploring. Parking is hard to find in Key West, and so it’s good to know you CAN park here.

Snorkeling in Palm Beach County and the Treasure Coast

While I live in Broward and I often bring my snorkel gear to the beach, the best spots for seeing fish and other sea life are north of here.

This City of Boca Raton park is a gem, and Boca residents know it. Non-residents pay $17 on weekdays and $19 on weekends to park here. (If you’re heading here, be sure to check conditions before deciding to pay.)  What’s special here is an extensive set of natural coral rocks right off the beach in four to six feet of water. These red rocks teem with blue tangs, parrotfish, snappers, sergeant majors and an occasional barracuda or two.  It’s among the best shore snorkeling I’ve experienced.  The park itself is a lush shady hammock, with a boardwalk to explore and picnic tables and shelters.

A note about snorkeling at Red Reef: From time to time, parts of the reef are covered by sand. Boca parks folks say: “Snorkeling at Red Reef Park (near lifeguard tower 9) varies from wonderful to poor depending on the beach conditions (waves, current and wind).”

Peanut Island is a man-made island in the middle of the Port of Palm Beach. Its rocky shoreline and its location directly in the mouth of the inlet make it a magnet for colorful fish and creatures, from rays to manatees to small sharks. It is well-known for having some of the best easy-access snorkeling in South Florida. 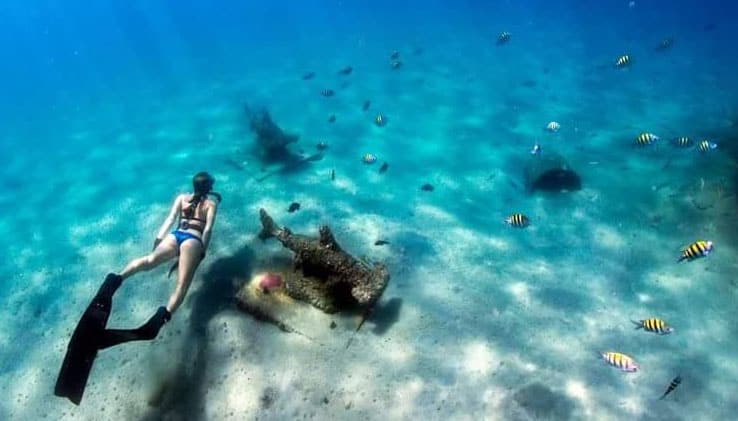 People have always used snorkel masks and scuba gear to explore around the Blue Heron Bridge. The water here is crystal clear at high tide because it is located a mile from  the Lake Worth Inlet. A few years ago, the county completed a novel project at  Phil Foster Park, which is an island on the Blue Heron Bridge — a snorkeling trail. Workers built a man-made reef in 6 to 10 feet of water right off the beach. It is about 800 feet long and is located in front of a lifeguard stand. 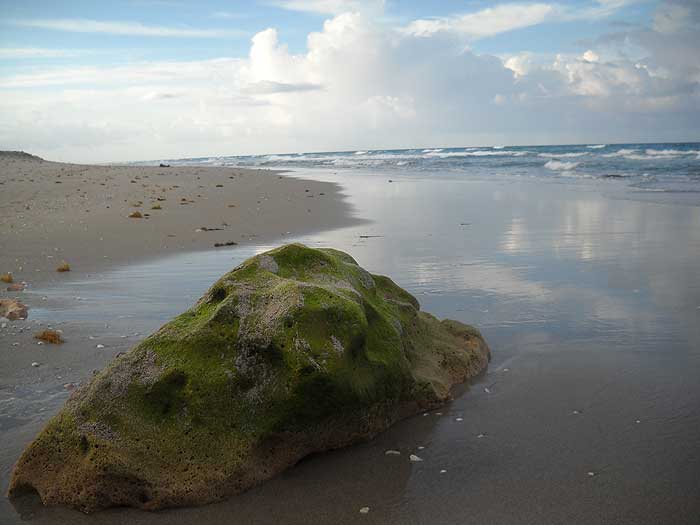 This spectacular property has so much going for it; it’s great to explore on foot, by boat or underwater. To reach the expansive beach, you walk or take a tram over a long boardwalk over the picturesque saltwater lagoon. At the beach, there are large rock formations visible at low tide and a worm rock reef just off-shore. These features attract a great variety of sea creatures including stringrays and sea turtles. A park ranger leads a guided tour of the reef on Saturdays from June through August at 10 a.m.

This park, about a half mile north of the Jupiter Inlet, is home to extensive natural limestone rock formations right at the beach, making it ideal for snorkeling. The same geological formations at play at nearby Blowing Rocks Preserve are evident here, with similar results in attracting sea life. You can walk along the beach between Blowing Rocks and Coral Cove.  The park has 600 feet of lifeguard-watched beach, picnic areas, playgrounds and free parking.

Dramatic, cliff-like rocks extend into the water and, on calm days, provide an excellent snorkeling location. There are enough sharp-edged rocks that you should think twice about snorkeling if there are waves to buffet you.  This park is owned and managed by the Nature Conservancy, which has created some appealing nature walks and a nature center across A1A on the Intracoastal side of the park. Because it is a preserve, nearby Coral Cove Park is the place to have your picnic.

An unusual “worm reef” protects an idyllic lagoon and creates a perfect home for marine life. The reef was created by sabellariid or “honeycomb” worms that cement together sand and bits of shell to form porous rocks and ledges. The reef attracts a good variety of fish and sea creatures — perfect for snorkelers, particularly young ones,  because the reef protects kids from waves.  Get there early on weekends because the parking lot fills up.   There’s a bathhouse with  showers and pavilions for picnicking.  Bathtub beach is located on South Hutchinson Island on MacArthur Boulevard, which branches south off A1A at the southernmost bridge access in Stuart. 1585 SE MacArthur Blvd., Stuart.

The best place to snorkel from shore in these two urban counties is anywhere there are rocky areas, which are generally created to reduce shore erosion. This video from VisitFlorida.com suggests  the rocky area around Government Cut in Miami and off the lighthouse in Cape Florida Bill Baggs State Park in Key Biscayne. Many sites recommend snorkeling off the beach at Commercial Boulevard in Lauderdale By The Sea.  The reefs here are quite a ways off shore, so they require dive flags and strong swimmers.
Important snorkeling tips: Considering a snorkeling outing? Keep in mind: Good snorkeling requires good conditions.

If you’re interested in snorkeling trips by boat to coral reefs, consider these two outstanding parks:

Florida Rambler guide to the best beaches in the Florida Keys

Snorkeling shipwrecks from the beaches of the Atlantic Coast

Most shipwrecks must be reached by boat, but these three can be reached from the beach by strong swimmers and those with kayaks or paddleboards. A few safety notes: You must have a dive flag to venture to these wrecks and don’t go alone. 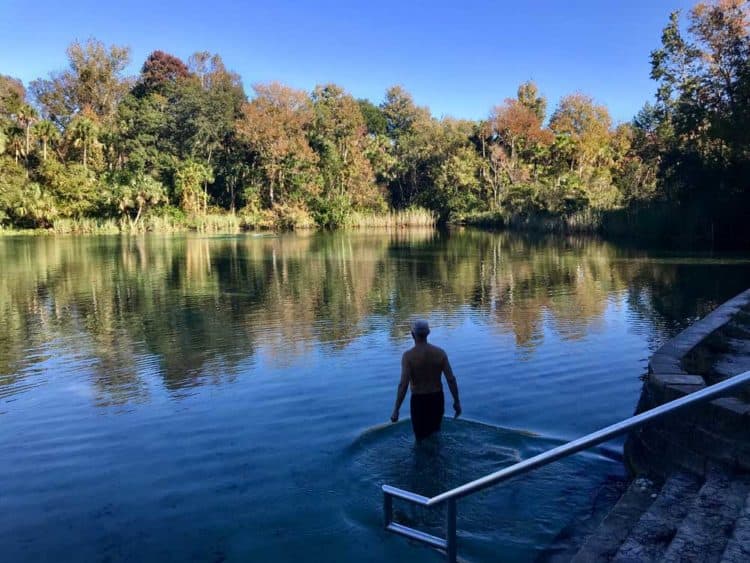 The swimming area at Alexander Springs in Ocala National Forest is excellent — if you like 72 degree water. (Photo: Bonnie Gross)

Our favorites listed on this page are all salt-water snorkeling excursions. We also highly recommend snorkeling in Florida’s fresh-water springs, which have crystal-clear cold water and are full of things to see. They are located in Central Florida and North Florida.

Here are a few particularly good springs for snorkeling about which Florida Rambler has written:

Here’s a comprehensive guide to snorkeling in springs. 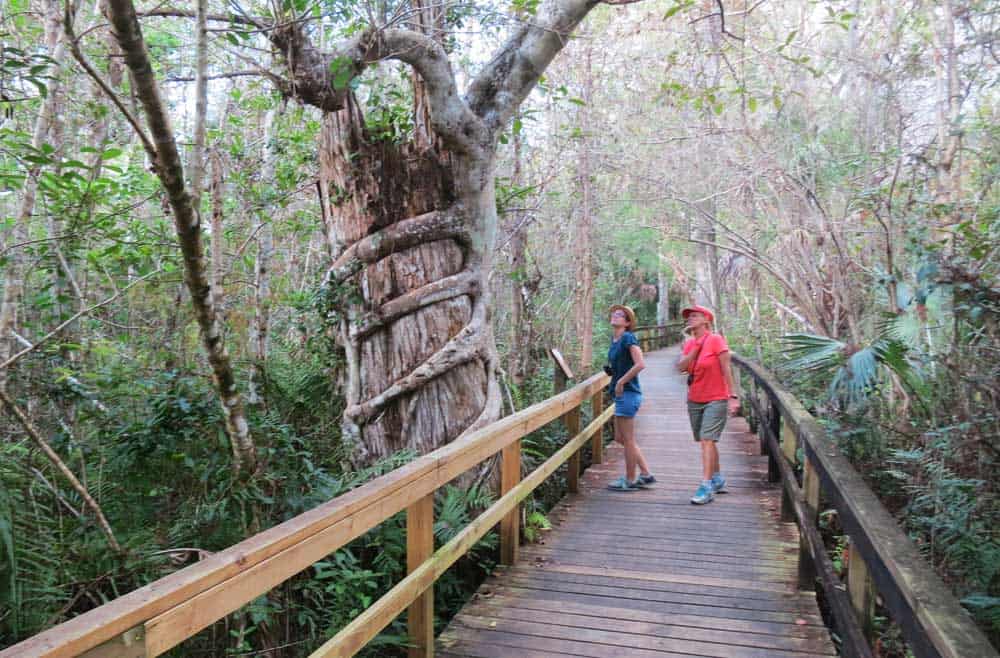 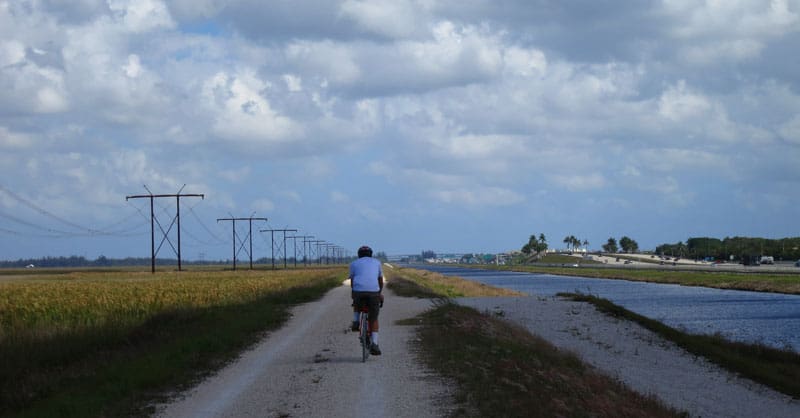 Me and my Husband are planning a snorkel trip throughout Florida. Do you know any shops the rent snorkel gear and wet suits?

There are snorkel and dive shops everywhere in Florida. You won't have any problem finding one.

What about on central West coast of Florida? Like from Hudson south to Venice?

If you go to visit Phil Foster Park or Peanut Island, and the tide is out and the water is murky, there's another alternative very close by. Riviera City Beach (behind Wings and Mulligan's at the East end of Blue Heron blvd) is the jump in point for a beautiful man-made artificial reef that is a short swim north from the City Beach behind the Ritz-Carlton, but still inside the safe swimming area buoys. The water here is ALWAYS gin-clear but can get rough if there are lots of boats, but we've seen dozens of species of fish, stingrays, and even lobster under the rocks. Use the satellite view of Google Maps and the reef is easy to locate.

Thanks, John. This is a great tip! Will check it out.

In Tavernier Florida in-between Islmorado and Key Largo there is a resort called ocean pointe were at the beach area there are rocks on the right side were I have seen small tropicals, nurse sharks, spiny lobster and Manatee. Check out VRBO 1599024 listing for property details

In the footer of this page, you'll see links to Hotels.com and Booking.com, where you can price accommodations.